Now that Joe Biden has selected a female VP and finally claimed the nomination, can we...

For a long time, only one person on earth, her closest friend, knew about the incident. They used to work on the Hill, and what the vice president had done was insidious and hard to name if you weren’t familiar with the way some men in politics liked to handle women as though they were overgrown babies—no harm in a little tickle, a pinch on the thigh. The incident had occurred at a fundraiser and when she whispered the details at some desolate after-party bar, her friend had asked if she planned to tell anyone and she’d said, “Of course not. He’s the vice president. I’m a nobody. A nothing.”

So she could not believe it when the former assemblywoman from Nevada came forward, many years later, and described to news cameras how the vice president had touched her. He had recently announced that he was running for president (again) and the assemblywoman believed that people needed to know. In the middle of the press conference, her closest friend called and said, “You’re still a nobody. A nothing. That woman you see on TV right now? They will ruin her life.”

Later, as she packed for a three-day conference in San Francisco, she reminded herself that the vice president hadn’t raped, hadn’t pressed her to a bed and waved his dick in her face. She told herself that he wasn’t a dangerous person, just oblivious to realities in which he did not sit at the center. She tried not to think about how such obliviousness was one of the most dangerous ways for a person to be.

She fell asleep to the news, where the assemblywoman was still talking. Asking to be taken seriously. To be believed.

In San Francisco, she had no idea that her fate would be altered by airline miles, for had she ended up on a different flight, or even in a different row, she would have likely heeded her friend’s advice. Run her business. Gone on with her life. But then at SFO, a gate agent called her up, said she’d landed a complimentary upgrade, and printed a new boarding pass for seat 3D.

She heard her seatmate before she saw him, his voice like thunder sounding in the wings of a stage. When he appeared in the aisle, he was flushed and booming into a cell phone. White, broad-shouldered, thick waves of sandy hair. He wore a yellow polo and khaki pants and brown leather loafers without socks. He flopped down next to her, knocking her complimentary bottled water to the floor, and kept on booming.

She opened a travel magazine and shrank down into her seat.

That was the worst thing about these ‘incidents,’ she thought as she watched the flight attendant flee—the way they destroyed your confidence in your own perceptions.

In the air, her seatmate’s attention turned to the flight attendants. Apparently he took at least forty-six first-class flights a year and, in his opinion, everything about this one was wrong. The hot towel was too cold, the replacement towel too hot. The drink cart lacked some obscure brand of whiskey. Both flight attendants in first class happened to be women. When one of them, a tall brunette in a red neck scarf, apologized about the whiskey for the hundredth time, the man asked for her full name. He said he planned to “file a report.” He demanded to know if she liked her job, if she thought she deserved to keep it, and then he laughed a seat-shaking, thigh-slapping laugh, like the whole thing had been an extended practical joke. Only then was the flight attendant permitted to walk away.

It was the laugh that made her stomach clench. Right when things were getting bad enough that another passenger might feel compelled to intervene or the flight attendant might feel justified in using words like “verbal abuse,” he’d wielded his laugh like a shield. Don’t be so sensitive, take a joke already, everything is normal here.

That was the worst thing about these “incidents,” she thought as she watched the flight attendant flee—the way they destroyed your confidence in your own perceptions.

She glanced around at the other passengers and realized she and the flight attendants were the only women in first class. She wondered if these other men had noticed what she had just now, what it would take for one of them to call out their own kind.

She finished her magazine. She drank a glass of wine. Her seatmate watched ESPN and drank copious amounts of a less obscure whiskey. She found herself thinking about the warm grip of the vice president’s hand on her neck. The way he pulled her in, sudden and close, his nose brushing her face. She had been terrified that he was going to kiss her.

Somewhere over Nebraska, her seatmate resurrected the whiskey situation. “Why don’t you have what I want?” he roared at the second flight attendant, an older blond in a black cardigan, who stood rigid by the drink cart.

She stretched up in her seat. The other passengers were all reading newspapers or sleeping or otherwise useless. She thought of the assemblywoman speaking on TV. She tapped the man’s shoulder and he paused in his tirade, giving the flight attendant enough cover to hurry the cart down the aisle.

“You should be ashamed of yourself.” She felt light-headed, her chest was tight, but she pushed on. “You’ve been acting like a bully this whole flight.”

He lurched back into his seat and stared at her, panting a little. She felt the heat radiate from his body. His cheeks were swollen, red. His eyes slid around like wet marbles. She imagined he’d probably already sized her up during boarding and determined her to be a nothing.

“Who do you think you are?” he slurred.

Laura van den Berg's most recent novel, The Third Hotel, was named a best book of 2018 by more than a dozen publications and was a finalist for the Young Lions Fiction Award. A recipient of the Rosenthal Family Foundation Award from the American Academy of Arts & Letters and an O. Henry Award, she teaches fiction at Harvard. Her new collection, I Hold a Wolf by the Ears, will be published in 2020. 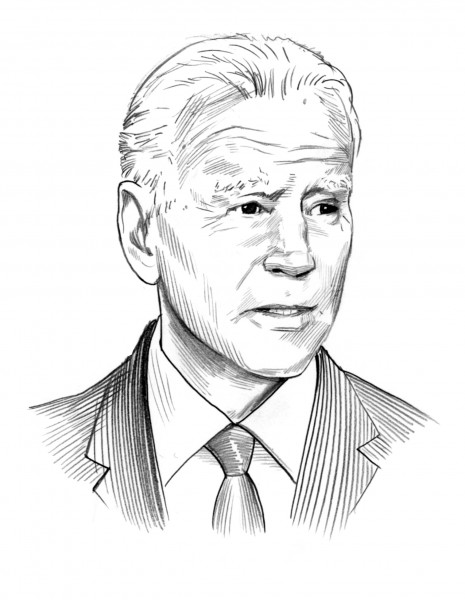 “Social norms have begun to change, they’ve shifted," Biden said in a statement on Twitter following accusations he'd made some women feel uncomfortable. "And the boundaries of protecting personal space have been reset. And I get it. I hear what they’re saying. I’ll be much more mindful, that’s my responsibility and I’ll meet it."