Please allow me to introduce myself: I’m a man of wealth and taste.

Yes, I know the Rolling Stones’ song, “Sympathy for the Devil,” opens with this line, which is exactly why I am opening with it, too, not because I consider myself to be the devil but rather because you do. And leading psychologists, of which I have nineteen on speed dial, here, have a look, would describe this phenomenon “projection;” what you see in me is, in fact, the truth about you. I am a mirror. Tell me who you think I am and you describe yourself. Look at me and see the end of civilization. See corruption, or decadence, or the cruel monetization of your children’s social lives. The apocalypse. It’s just me though, the mirror. Come a little closer.

I have come to tell you that you can trust me.

I have come to allay your fears.

What Isaiah Berlin once said was true, about the world being divided into foxes and hedgehogs, how a fox knows a little bit about many things and a hedgehog knows everything about one big thing. Plato and Hegel were hedgehogs. But Herodotus and Shakespeare—they were foxes. Who would you rather party with? Do you want to live in a world of ideas and punishment or a world of romance, of kings and queens. Hedgehogs read The Wall Street Journal but only a fox can crush you at Red Dead Redemption. You see I am talking about imagination. I am talking about a fundamental difference between having an idea and having a worldview. Vision. Most guys you meet like me, though you won’t meet most guys like me because most guys are not like me—but anyway, most guys you might meet and imagine to be like me—they’re not. They’re hedgehogs. I am a fox. And one thing I can tell you about hedgehogs, particularly stratospherically rich hedgehogs, they’re fixated on the status and scope of their one big thing. Like, their thing that they’re going to send your kids to Mars for Christmas break. Or their thing that they’re going to prolong life indefinitely. They like mantras like “locate, illuminate, eradicate.” They are preachers and charlatans who end up with sexy second wives and solely funded film studios staffed with . . . poor hedgehogs.

I have come to help.

I have come to remove the needle from your arm.

You don’t want my help? Well let me tell you something else. Let me tell you what I know. Aren’t you just a little bit curious? You should be. I know the mobile numbers of the last six guys you’ve slept with. I know your daughter’s favorite nail-polish colors and the birthdates of her best friends, their siblings’ preferred pronouns and the secret longings of their teachers and au pairs and tennis pros. I know how many fire emojis your husband posted five minutes ago on that photograph of Alessandra Ambrosio blowing out the candles on her birthday cake. I know how many wives will qualify as “suburban” when it counts, and I know the type of toothpaste Steve Mnuchin prefers. I know the real recipe for Coke Zero and the circumference of the Oval Office. I know who colors Melania’s hair and which drinking game staffers at the Senate Select Committee on Intelligence play when they’re bored. (It’s not truth or dare.) I know the average attention span of your soon-to-be eighteen-year-old because he is actually now seventeen but turning eighteen on November 1, which is meaningful to me. And I know how to extend his attention span in order to entice him to watch a video that doesn’t look at all like a political ad but rather exactly like those video games he loved as a boy, so he will keep watching. As long as I want, he will keep watching. And for those of you who have no attention span, a category into which I’d place most Americans between the ages of thirteen and eighty, let me tell you something else I know: All I need is six seconds. Six seconds for you to blink at an image and feel something. And that feeling may not be one you recognize at first but it will start to link up with certain facts and ideas and experiences you’ve been exposed to and those things then coalesce and inspire you to make a choice you might never have thought you would have made. Maybe you start to drink vodka. Maybe you convert to Christianity. Maybe you vote for a different political party than the one you’ve voted for your entire life. I am not interested in politics though. I am just a guy who happens to know a little bit about a lot of things. Knowledge, in fact, is my true business model. Would you like to invest? Wait, you already have. And so has your wife and your mistress plus her lover and their new child and the guy who comes and mows your lawn in Amagansett. That’s a lot of knowledge I have, isn’t it. It’s, almost, unhealthy.

I’ve come to save you.

I’ve come to write you a check so you will do yourself a favor.

You will stop looking in the mirror.

Lea Carpenter is the author of the novels Eleven Days and red white blue. She is working on a story collection. 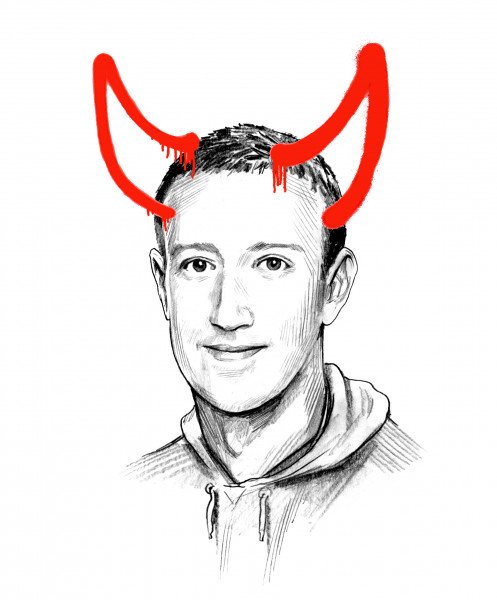 While declining to ban political advertising from Facebook ahead of the 2020 election, Mark Zuckerberg has instead created an oversight board to referee controversial moderation decisions and launched an initiative to research Facebook’s and Instagram’s effect on democracy and elections. The company is paying between 200,000 and 400,000 users to shutter their accounts for one or six weeks ahead of November 3.