We were one of three North American teams who’d advanced to the North-Western Hemisphere Elimination Round—us and this group from New Brunswick and a dark-horse team out of Spokane—spinning our vaccine tubes in the final two minutes of our final practice run while Mark was writhing on the floor of the Quarantine Containment Unit, moaning and groaning in pain and doing an Oscar-worthy job of playacting. Every once in a while, to great effect, he would slam the palm of his sweaty hand—how Mark managed to make his hand so sweaty was beyond us—he would slam his hand or kick his foot against the Plexiglas of the QCU. And through it all, he wouldn’t stop screaming. He screamed for morphine, screamed for his loved ones, screamed, “Please, dear lord, please, whatever you can do just make it stop, kill me, kill me, kill me!” his voice hoarse and raw and unsettling.

It was all rather convincing, and we wondered how much work and practice he put into the whole performance.

Mark had competed for a spot on the team proper, of course, but had just missed making the Nationals crew. In the quarterfinals round, his 5’-OH was getting phosphorylated, so the whole compound got stuck inside the lining of his subject’s gut and never made it to the bloodstream, but even still, he’d constructed his vaccine based on heterodimerization rather than homodimerization, which, to be honest, at this stage of the competition, those kind of rookie mistakes won’t cut it, and he was knocked out before he could make it to the semis. But then, after a lot of begging and showing up at team meetings and practices, he’d managed to convince Coach Michaels to let him participate by pretending to be the infected.

We’d had no idea, of course, that he’d actually given himself something—some rare, incurable and pain-ridden strain of the Machupo virus he’d ordered online—but this bit of method acting worked like a charm. All of us had been told plenty of times, by Coach and by former Nationals champions, that the worst part of competing—once you get past Nationals and all the way up to the Global Finals—more stressful than the cheering crowds, more than the announcers pointing out every small flub you or your team made, more even than the cold robotic voice counting down the clock, is the screaming sick. They’re the ones who can really throw even the sharpest team off its game.

He screamed for morphine, screamed for his loved ones, screamed, ‘Please, dear lord, please, whatever you can do just make it stop!’ It was all rather convincing, and we wondered how much work and practice he put into the whole performance.

It’s funny, though, right?, because the screaming sick are there from the beginning, at district and state competitions, all the way down to the county level, part of the effort to re-create an atmosphere similar to “that which the competing teams might experience during the main event,” except, these are some, what?, local volunteers, usually. Overeager yahoos pulled straight out of the wings of the community theater, or sometimes the mayor would want a role or her husband or delinquent kid, or the principal of whatever school’s gymnasium we were competing in. These “infected” weren’t nearly as distracting as the real deal you’d run up against once you moved past Nationals. I mean, they were distracting, but for all the wrong reasons, right? The whole spectacle—their overexaggerated pantomimes of internal bleeding, or lungs collapsing, or gastrointestinal failure, the clearly fake blood trails leaking from their eye sockets, their herky-jerky physical contortions and yowls of pain—the whole spectacle of it seemed ridiculous, and to some maybe even a little offensive? as if we were schlocky nobodies competing in some bubble-gum-colored game show and not semiprofessional competitive virologists.

Scuttlebutt was some of the teams purchased actual sick patients to use during practice, but language in the competition guidelines is pretty strict against the use of “potentially ill and/or dying human subjects” for team practice, mostly due to the potential legal consequences, lawsuits, etc., so I don’t know how much stock I put into those rumors. (There was that thing in Moldova, but all that’s been secreted behind a solid wall of NDAs, so who knows.) From what I could tell, though, the kind of sick person you can buy for practice is usually too far gone to be much use. For one, they don’t mimic the distraction aspect—most of the time, they simply lie there—but the real sticking point is: The kind of sick people you can buy aren’t a great help in terms of the actual competition. Their illness is the kind that had long ago proved impermeable to all antiviral or vaccination efforts, say, or they’re sick with something you already know and understand, something you’ve probably been vaccinated against as a kid—Columity, say, or Measles-17—which does nothing for your lab-work simulations.

So, to have Mark giving it his all inside the QCU, hollering and experiencing some kind of serious and wretched pain, there were a few minutes at least when we felt like we weren’t engaged in some dress rehearsal. A few minutes when we were the real deal, were part of the show, laboring under the spotlights to a televised audience of billions, proudly representing the U. S. of A. We pushed through our practice run at a fever pitch (ha!), and we finished a full fifteen seconds before time ran out with no deductions, our fastest time to date. We were pretty psyched, and even though Coach told us all to get to bed early, Simone broke out a bottle of Scotch and we crowded into her hotel room, toasting our future success on the global stage, each of us wishing Mark could’ve been there to celebrate with us, except he’d been rushed to the ER right after the clock ran out, and then died a couple of days later from hemorrhagic fever, but by then, we were already back home, having lost out to the team from Spokane.

Manuel Gonzales is the author of the novel The Regional Office Is Under Attack! and the story collection The Miniature Wife, and winner of the Sue Kaufman Prize for First Fiction and the John Gardner Fiction Book Award. He teaches literature at Bennington College and is a full-time faculty member at the Bennington Writing Seminars. 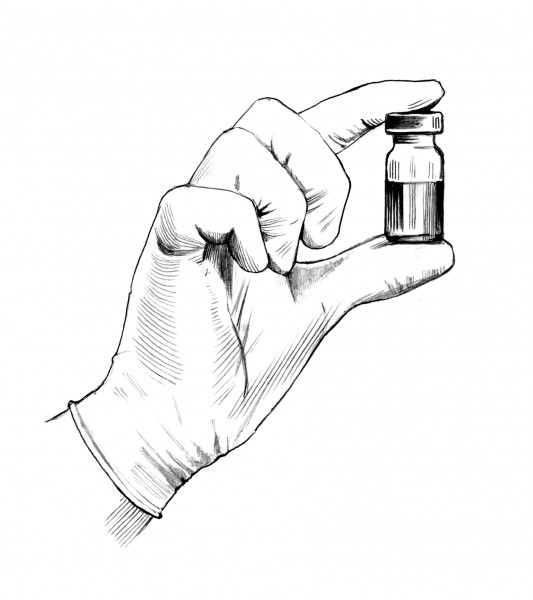 As companies and research institutions around the world compete to create a Covid-19 vaccine at a historic pace, the U.S. government has selected at least five firms to give an upper hand.

In May, the U.S. government announced Operation Warp Speed: a plan to try to win the global vaccine competition by fast-tracking a select few of the more than 135 Covid-19 vaccine candidates being researched worldwide. Its hopeful, and perhaps impossible, goal is to produce 300 million doses by the end of 2020—aiming to accomplish in one year what is normally done in about ten.

The U.S. has selected at least five companies, most of which are based in the United States, to back with extra funding and help with running clinical trials and the uncommon possibility of beginning manufacturing—itself an enormous logistical nightmare—on unproven drugs in hopes that trials will prove them effective. Here, the five finalists—loosely listed from furthest along to furthest behind, though which (if any) may actually work remains impossible to say.