At 6:45 a.m. on Sunday, Debra drove her teen daughter Lou to Starbucks for her shift. She pulled into the parking lot. Already people were waiting to get in.

“Be careful,” Debra said. She tried to say it cheerfully, but she just had to say it. Her daughter barely nodded. She stretched her neck and then pulled her long hair up and through a yellow satin scrunchie. She twisted the scrunchie and pulled her hair through again, stopping midway so her hair was part ponytail, part messy bun.

“You have your mask?”

Lou let out a big sigh.

Debra hated—hated—the feeling of nagging, hated how her mouth felt as the words took on shape and sound, how repetitive it was. Saying it again made her tired, so why did she say it each time she dropped Lou off? It was a kind of superstition, like knocking on wood, but only in her secret calculus. No one knew it, but Debra had always read the safety card on airplanes when the flight attendants went over the emergency exits, the oxygen masks, the seat-belt buckles. Not to do so seemed to taunt fate. Hubris. That was a word she taught to her students when they did the mythology module in her 6th grade class. The kids loved the stories, and she would sneak in vocabulary while they barely noticed. Icarus, Cassiopeia, Arachne. Such vivid, weird myths. Debra liked to talk with them about how humility could be a virtue, and this became her private way of countering the president, who exhibited all the dangers of excessive pride and self-regard. But it was complicated. She also wanted them to stand up and be brave when necessary.

Safety was quicksilver, beading and disappearing each time you reached for it.

The virus, though? Debra respected its power, felt humbled by it, knew she understood little about it. Surface transmission. (All the wiping for months, the groceries in the garage, the scouring with 70 percent alcohol.) But it wasn’t the surfaces after all, it was the air—aerosol transmission. Super-spreader events. Maybe. So Debra focused on the masks and avoiding the indoors with crowds of other people. Limited her time breathing the same air as other people. She would avoid restaurants, theaters, and the gym, even when they opened up. (And airplanes, ha, hard to imagine ever getting on one again.)

She waited in her car as she watched Lou cross the parking lot and walk toward the building, her blue surgical mask slung under her chin, the straps hanging on her ears behind the long earrings she wore. Those burdened ears. The white plastic earbuds stuck in too. Lou always had the earbuds in. As the automatic door swished open, she saw her daughter pull the mask up over her mouth and nose. Debra resisted the temptation to text her a reminder to press the nose wire down around her nose bridge so the mask wouldn’t slip down. Of course Lou knew that: She would or wouldn’t do it.

Sometimes Debra thought she was overreacting, other times she knew she was underreacting. She really wanted Lou to quit her job once the summer was over, quit while they were ahead and no one in the family had gotten sick. But her daughter’s 12th grade classes were all online. Would her poor daughter see no one in person but her family all fall? At least at work she saw and spoke to strangers, albeit with a Plexiglas screen protecting her. Lou was saving up for a car, which gave her something to look forward to and work for. But allowing Lou to work also confused her, maybe. Over the summer, she wanted to see her friends in person, which became harder to deny or control. If it was okay to work and be indoors with people, why not be in a car with her friends? More exposure was more risk, but what did Debra know? Was the risk cumulative, relative?

Lots of arguments these past months. There was no living without risk, Lou had said to her. Then it was Debra’s turn to sigh. She would point to Grandma and Grandpa, but not mention herself. (Debra was 55, prediabetic, primed for a bad outcome.) They compromised on Lou seeing friends outside only, and in a mask and no closer than six feet. Debra knew Lou would try to stick to it. One of Lou’s schoolmates got sick from Covid in June. Two months later, she kept relapsing. But the tediousness of constant vigilance still fell on Debra—she had to keep all of them from slipping, eroding, becoming careless. She knew this the very first time she had watched her daughter in the yard with her best friend Ellen. Two girls sitting on separate picnic blankets. The sun was shining, the grass and the flowers growing and overgrowing as if the world were a fertile, lush place. The girls looked young, beautiful, healthy. How could they believe it was possibly there, lurking in them, when everything seemed so normal? The virus was a pre-Christian, tricky, temperamental, mercurial god. That word, mercurial, she loved to teach her 6th graders. They always wanted to draw Hermes/Mercury with his winged sandals and helmet.

Safety was quicksilver, beading and disappearing each time you reached for it.

A week ago, Debra had picked up her PPE care package from her mailbox at school. “Welcome Back” it said. Hand sanitizer, face masks with clear plastic mouth windows, and a plastic face shield. She would teach in person until the positivity rate went over 5 percent. She accepted this, thought it was better for her 6th graders, better they got out of their homes and saw their peers, even in masks and at a distance. The truth was, she had hoped the school would make her do it for her own sake. She wanted to see them, and just like Lou, she hated the online classes in the spring. When she spoke to her students, their mics had to be muted, and with her headphones on it was different than what she thought of as silence. More like a void, which disoriented her. (She had read about negative decibel anechoic chambers. People go crazy without some ambient noise.) It was a shock to her how much she missed all their tiny human sounds.

She picked up Lou after her shift. Watched her stare down at her phone as she swiped, texted. Tomorrow was Labor Day, the last day of summer.

On Tuesday, the first day of school, Debra woke before her alarm, before 6. She got dressed and drank a strong coffee. Then she woke Lou (who promised she had tested the link for the opening day assembly via Google classroom). Debra answered the daily health questionnaire she had received in her email. Cleared to go. After her second cup of coffee, she drove to school. She turned off the ignition and continued to sit in her car. She closed her eyes and took a deep breath. I will keep my distance; I will take care. I will be one of the lucky and I will stay safe. She opened her eyes.

Dana Spiotta is the author of five novels, including Wayward, which will be published in 2021, Innocents and Others, and Eat the Document. She teaches creative writing at Syracuse University. 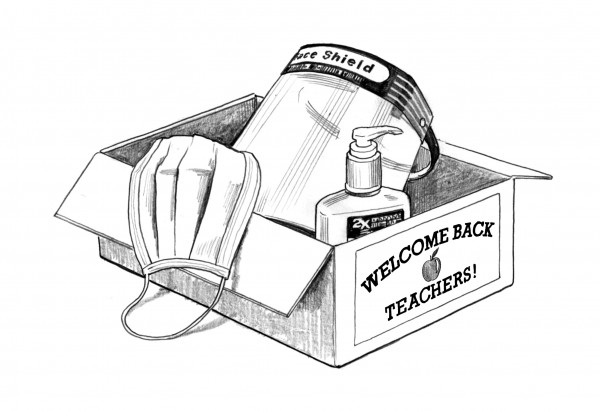 As many schools reopen for in-person teaching, a recent study found that over one-third of school employees are at increased risk for severe Covid-19.