The anxiety, at first, as always, is a tiny bit fun. An off note in the breeze, a single drop of sky-sickliness that tinges blue to green, and she’s tracking a big rainbow blob on her phone screen, its heart a shape-shifting red. Then the air-raid signals—which he assures her aren’t called that anymore; he’s not sure what they’re called but this isn’t fucking Berlin, baby. They are on the outskirts, where the blob bleeds rusted brown. She can never remember which one is the bad one—which is worse, watch or warning, she Googles dutifully—but—ah—see?—the possibility exists. Watch out (you’re probably fine) ((but there are no guarantees)).

We’re fine, he says, cajoling, levity that’s about to turn the corner to exasperation. He multitasks—opening a beer, mincing garlic, pausing intermittently to tap at his phone screen—showcasing just how blithe he is in the face of danger.

She suggests again that they go to the basement. She is not some kind of doomsday prepper, but she did purchase, recently, a small halogen lamp that can be affixed around the head with an elastic neon strap. There are also snacks in a cardboard cooler—not the fucked-up stuff she found online, not powdered Preparedness Eggs and Saran-wrapped Survival Salmon, just normal snacks, granola bars.

This isn’t, he says, and his eyes tunnel into her like voles. About you, they imply. Necessary, he says.

Mondays are her days to monitor sixth-grade detention—today a truant, a plagiarist, and a kid who’d stolen two sheep’s eyes from the dissection lab and thrown them at an intolerant recess monitor—but when she got home, she turned on the television to watch preemptive interviews with the red-zone people, which lent itself to hypothetical itemization: where would we go; how would we feel; what would we save. Then she Googled famous tornadoes and found aftermath photos of people lifting individual roof shingles lest they unearth anything familiar. She clicked a link to donate $15 to relief efforts; she authorized a debit-card processing fee of $1.50.

You can’t make tornado your personality, he says meanly, especially when it’s not even our tornado, and she mumbles that everything’s going to hell, and he says, with more affection—unity afforded by a common enemy—that she sounds like her fucking mother.

She was remembering the feeling she’d get as a kid, wishing for her house to burn down but not all the way down, just so the world would change color a bit.

She’d earlier scolded a student who’d whooped over the prospect of encroaching doom—it was, unsurprisingly, the truant, hoping for days off—but all the while she was remembering the feeling she’d get as a kid, wishing for her house to burn down but not all the way down, just so the world would change color a bit.

He’s on the porch now. God, the sky’s beautiful, he calls through the screen door.

Is basement a personality? She descends the stairs.

Let’s think about this, she’d said in detention, because she is allegedly an adult, brimming with perspective, with transcendence, with the ability to reframe. Let’s really think about this, and they’d all regarded her with not quite boredom, entertaining the prospect that she was about to publicly lose her mind. There is a real threat we’re dealing with here and this won’t seem so funny when we’re looking for our doorbells among the rubble.

A dense rain comes, filling the space with the steel-drum rhythm of water on gutter. She puts a folded towel into the dryer and turns it on for company; she boosts herself up and pretzels her legs beneath her. When they awaken in the morning, the sky will be orange and the roof will be intact and the sun will have already dried the sidewalks.

She’d gesticulated wildly at the plagiarist. If it isn’t this, it’s going to be something else. The sheep-eye kid had started to cry. She’d released them early. There will be calls tomorrow from parents.

The mildew comes alive in the walls and the fleshier parts of her bounce as the dryer spins.

Oh for Christ’s sake, he says from the kitchen, coming in to find her gone.

Claire Lombardo is the author of The Most Fun We Ever Had, which debuted on The New York Times best-seller list in June 2019 and is being developed into an HBO series. 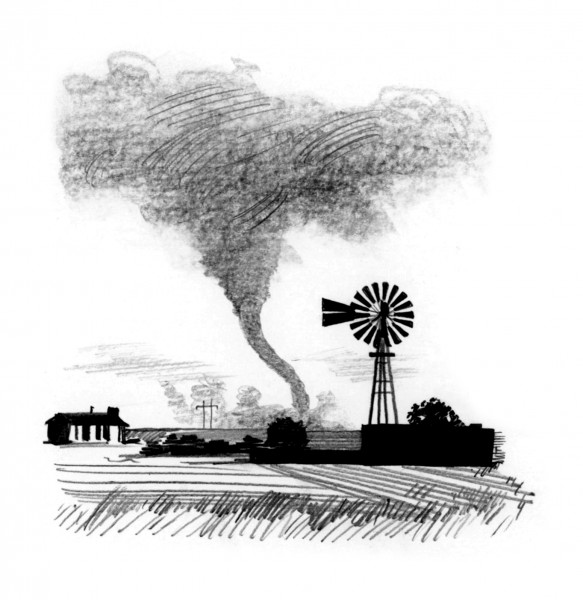 The 2019 tornado season was marked by record-breaking clustering when more than 430 tornadoes touched down from Kansas to Ohio over thirteen consecutive days. For the first two months of the 2020 season, 140 tornadoes were reported, an unusually strong start and double the typical average. Then, on March 3, a series of storms and tornadoes struck a 50-mile swath of Tennessee, killing 25.