There’s a tiny moment of nothing and then everyone gets under their desks. The alarm starts blasting. I hear banging in the hall like lockers slamming but there are no lockers outside percussion lab. I put my fingers in my ears, but I still hear Mrs. Shiner, who’s screaming SADIE GET DOWN.

I pull Yvette Bailey under my desk with me. I do that. I touch her without asking if it’s okay to touch her and then we’re on the ground. I try to let go but she’s clutching my arm and I can’t tell who is touching who and she’s shaking like she’s being electrocuted and repeating I’m Yvette I’m Yvette. Savannah scooches her desk closer to Anna B.’s and loses her balance and falls off her chair, but thankfully sort of laughs, so at least she’s one less person spazzing. It’s like, this morning when I woke up I had no idea I’d end up being grateful to Savannah Jimenez. There’s no predicting.

I notice something wet has trailed from Yvette Bailey’s area to me. I can smell it. This is suboptimal, but I can’t move because she’s holding onto me, and now Shiner is shouting at her, like in her face, which means she’s shouting in my face also and I need her to stop.

I shout HER NAME IS YVETTE BAILEY and Shiner shouts back SHUT IT, TANNER so close that she spits on me and I hear a voice I’m pretty sure is my voice shout NO YOU SHUT IT, SHINER.

The alarm stops at this moment.

Shiner drops to her knees, staring at the palms of her hands. She says Rosenthal. Rosenthal. Savannah says What about Mr. Rosenthal? Anna B. says I have him next period and Mrs. Shiner says Pretty sure that now you don’t. Then she says This can’t be happening.

She folds in half and her voice is muffled but I hear I saw him and (muffled). He had a gun in each (muffled).

Miles says Who did?

Yvette Bailey’s eyes move to her pee which has soaked my pants. She mouths I’m sorry, Tanner. I mouth back I know and make my Tuesday windbreaker cover her pee.

The next morning, I put on my Wednesday windbreaker and go downstairs where I hear my mom. I realize she’s talking to my dad when she says Because you’re stingy, Dan.

He says You bet I am, Cynthia.

She says To think I made a human being with you.

Dad says How are you, son? No one says anything and he says Thought I’d get you a pounder from Home Sweet Home.

HSH has cinnamon rolls that weigh like a pound each.

I say okay and we stand like a diorama until dad says Cynthia would you like an almond croissant and Mom lets out a noise that means either yes or thank you.

I ask where my phone is. Mom stares. I say it was in the pocket of Tuesday. Mom says Your phone is on the counter and I say But where’s my Tuesday windbreaker?

I say Please. Tell me you just washed it.

She says I didn’t think you’d want it anymore, it was soaked—

I feel light in my brain.

I say Seven days. I hold up seven fingers. I say THE TRASH? DID YOU PUT IT OUT? I start to bang my head on the table. I don’t want to break my head but I want the hurt.

If anyone knew they were human, we wouldn’t be surprised when stuff hurts. We’d be shocked at the end of every day that we got through another 24 hours unmutilated.

She runs back in waving a safety ice pack that she cracks on the table. She holds it out and my face drops on it. I feel the cold and hear crunch as mom starts counting down from 100. I join at 57 and we go to 49 when I say okay. I sit up and swallow air.

Saliva goes up my nose and burns. My voice comes out dry.

I say I am maybe going to be expelled.

She says No, honey.

I say I told Mrs. Shiner to shut it during an urgent lockdown.

She says Good boy. What else?

I say Yvette Bailey peed on my Tuesday windbreaker.

I say I touched her. I pulled her down but didn’t ask first. Her body, her choice. I’m supposed to ask.

She says May I ask one thing? and I say No.

Then I say You can now.

Mom says You wanted to help.

I feel like saying I liked Mr. Rosenthal. That if it wasn’t for him, I would never have internalized the periodic table, but I can’t say that because he shot three teachers and six kids and himself. Instead I say I hate it when you guys fight.

I say It was weird to hear you call me a human being. I don’t think of myself as one and she says What and I say I mean… if anyone knew they were human, like actually, we wouldn’t be surprised when stuff hurts. We’d be shocked at the end of every day that we got through another 24 hours unmutilated.

I say But seriously. It’s like we keep forgetting the premise. Humans aren’t built to last.

My mom says Not a soul on earth will believe my 13-year-old said all that.

I say Grammy says you overvalue the way I talk.

She gets the heavy blanket and puts it on the chair next to me in case I want it and she sits too, her chair angled to the window. I say What are you looking at? and she says Outside. The rain in those buckets.

I say Because now technically—

She says Honey I’m not up for a science lesson at the moment.

I try to leave it but can’t. I say Mom? It’s not rain. What you’re looking at isn’t.

She tries to change the subject. Says when she was little in the desert, the raindrops were so fat and round you could count them. I say Mom, they weren’t.

She shakes her head no and I say Raindrops aren’t entirely spherical. The rate—

I say I have to. I say The rate at which they bust through the atmosphere makes them more like little—

Then she waves her hand to erase the last three minutes and makes a happier face. It’s fake and not good acting, but helps a little. She says You can’t let it go, can you?

She kneels next to me and I say Can I tell you one thing?

She takes my hand, says Tell me all of it.

I say Okay but can I have my hand back? I need it to describe.

She says sure. Her eyes are low-key reflective now.

I tell her that in the bucket it’s rainwater. In the sky it’s rain. Rain is only rain, like, when it’s falling. Once it’s fallen it isn’t that. I say it falls and then goes—

… to whatever will have it, she says. Like all fallen stuff.

Mary-Louise Parker, the author of Dear Mr. You, is a Tony, Emmy, Obie, and Golden Globe award-winning actress. Her writing has appeared in Esquire, The Riveter, Bust, and Bullett. 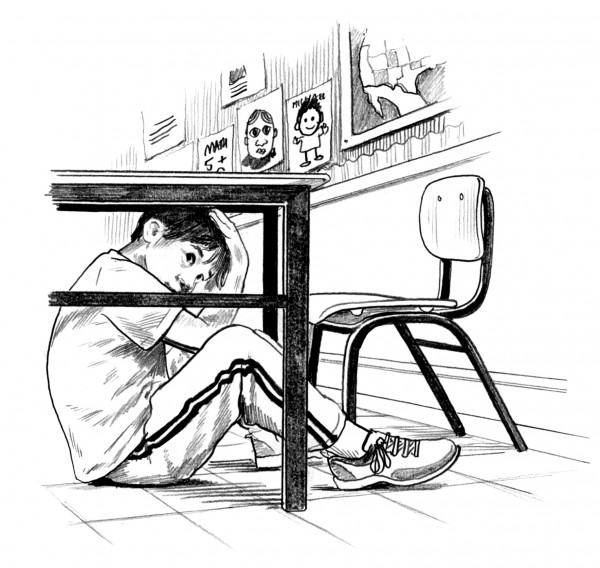 Every school year, millions of students experience a lockdown. The majority of them are caused by the threat or reality of gun violence—both of which can traumatize children.