The night before they ran, Hiela dreamt of cockroaches. A fleet of them, big ones—maybe a thousand or more—moving in unison. They weren’t silent, these cockroaches; they made a squeaking sound Hiela took for beckoning.

She rested on a mat on the floor of the detention center covered by a thin blanket of aluminum that did little to keep the heat in. Bodies lay around her tossing and shivering through the night. Next to her lay the boy who cried. He was maybe six. She didn’t know because when he was awake, he did nothing but cry. At first she ignored him, but he followed her as if he belonged to her. Hiela then tried hugging him as she would one of her cousins back in Honduras. Often, though, the men with guns would see and they would curse and threaten, even force them apart. Each night he’d fall asleep only if he could share her blanket.

So many around her had turned blue in the cold of la hielera—that’s what they called it. Some so blue that they glowed, their lips, their noses, their fingers and toes. Many moaned loudly and tossed, trying to gin up heat. Around her, more cockroaches swarmed. Hiela cast off her aluminum covering, tucked the sides beneath the boy, and used the bluelight of the bodies to follow the bugs into a corridor where they congregated in a corner, still chattering as they piled atop one another.

It was nightdark in that corner, but Hiela could see that the roaches had formed themselves into one giant cockroach. She stood stiff as if the cold had finally frozen her. When she tried speaking, steam rose from her mouth, but no words. She shivered.

You fear me, the roach of roaches said, but I’m not the one trying to kill you.

It’s cold, she said. I’m not afraid of you. It’s colder than usual.

Hiela noticed for the first time the sheen of slickness that covered her face. It was different from the sweat she felt dripping from her nose and chin in the desert where she walked for days, sometimes holding her father’s hand like a little girl. That big hand gave her so much comfort, even at sixteen when part of her screamed to let go. She wondered now if her father was even alive.

Hiela woke with a gasp, but the boy didn’t move even a little.”

Remember when that boy cried long and loud—

When his face caked with dried tears and snot and you wrapped your arms around him.

Yes, I wanted to comfort him.

It wasn’t because it was late and you wanted that brat to shut the hell up? So many uncharitable thoughts in your head that night, remember?

It doesn’t matter what I thought, Hiela said. I chose to hug him.

Yes. And you remember the men with guns, and frowns and shrugs where they should be carrying compassion? The one with the squinting eyes? Saw you hugging the boy and shouted, Hey! No touching! He yanked you, didn’t he? Remember how you spit at his feet. Shouted, Cucaracha!

Why would you say something like that, Hiela? Did I hurt you? Was I the one trying to hurt the boy? Do you even know his name? You left him to freeze, to disappear like that baby girl with the blue fingertips and toes. Remember her? One day here and then gone forever.

The roach of roaches’ torso split and there inside lay the boy, his skin deathly blue, blood and snot trickling from his nose.

What I’m telling you Hiela, the roach said. Is that you need to run!

Hiela woke with a gasp, but the boy didn’t move even a little. Sometime in the night he had wrapped himself in their blanket. A roach crawled out of his hair. Hiela removed it, but didn’t crush it as she had done in the past. Later that night when some of the others used their socks to clog the toilets, Hiela thought of her dream and gleefully joined in. Water pooled at her feet and the men with guns grew angry, but also distracted in the wet chaos. They didn’t notice when Hiela hugged the boy, put a finger to his blue-tinged lips. She took his hand in hers as her father had done and they ran down the same corridor the roaches had led her, slipping into the night where the stars from the Big Dipper glowed blue like the fingertips of the people in her dreams.

Rion Amilcar Scott is the author of the story collections The World Doesn’t Require You and Insurrections, which was awarded the 2017 PEN/Bingham Prize for Debut Fiction and the 2017 Hillsdale Award from the Fellowship of Southern Writers. He teaches creative writing at the University of Maryland. 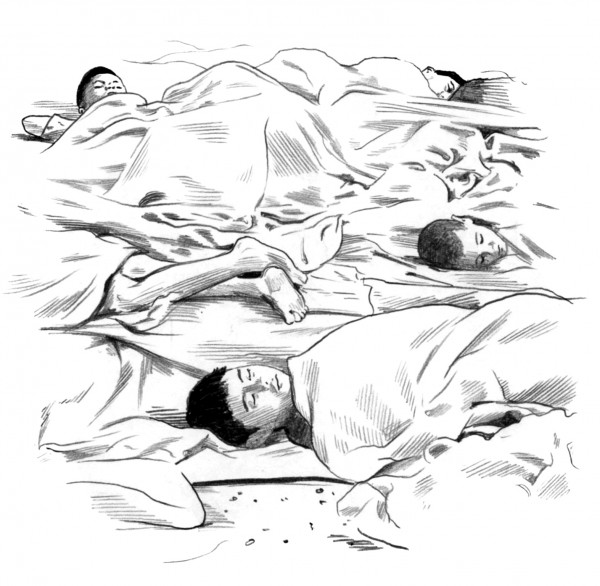 The detention centers are often so cold that detainees refer to them as las hieleras—“iceboxes” in Spanish.