Wilson’s dad warned him to be careful, but it was only Anthony—Anthony-from-fourth-grade Anthony, Xbox-after-school Anthony—so he took the S48 bus out to Westerleigh Park, where Anthony was waiting, shirt off, stretching his delts. He’d been taking Krav Maga over on Hylan and it’d transformed him—made his arms lean, his shoulders broad; Wilson swore even his voice was deeper. His plan was to start amateur fighting after high school, so twice a week they went down to the fields where Wilson could time his sprints, count off his sets, hold Anthony’s ankles while he did wheelbarrows across the grass.

Then when the day was done, they’d cool down on a bench and share a smoke. God, he loved watching Anthony smoke—how he drank it in like cool water. Those other white boys in their grade had switched to vaping the year before—“Pussies,” Anthony called them, and he bounced on his heels, slipping his head, throwing combinations in the air.

That night they made plans out in Castleton, where some dudes from Anthony’s gym could get them beer. It was a dive: AC busted, the floor sticky, the air hot and yeast-sweet. A crowd of men had taken over the front, shaking hands, sweating through their suits. Wilson spotted the shields on their belts, so he kept his eyes down and squeezed past to the back booth where Anthony’s buddies were waiting.

Anthony made introductions, and his buddies made space.

All night all they talked about was MMA shit, Anthony beside him holding court—talking about how to escape a mount or execute a double-leg takedown. They asked Wilson if he was a fighter too like Derrick Lewis or Kimbo Slice. He could be a monster in the ring if he trained. Anthony beamed. Roll up your sleeves; show ’em your arms; bro look at this nigga’s neck. They ordered more pitchers and Anthony ran down a list of who at the gym was worth fighting and who was a bitch. Up at the front, the news was on; there were cheers and whistles and applause and the bar crowd started singing. And the pitchers kept coming, and Wilson kept putting them away, Anthony’s friends howling as he threw them back, their hands on him, clapping his shoulder, squeezing his bicep.

When he came to, he was alone and drenched in sweat. The glasses were piled around him in the booth. He climbed unsteadily to his feet. Anthony and his friends had gone up front, and they were singing with the men, taking pictures.

A crowd of men had taken over the front, shaking hands, sweating through their suits. Wilson spotted the shields on their belts, so he kept his eyes down and squeezed past to the back booth.

Slowly, Wilson made his way outside, then around to the back. He balanced himself against the wall, then worked down his fly and pissed against the building. While he was finishing, he heard a door open and steps behind him.

“ ‘Niner-niner we got a code seven: black male rattling a snake in a public alley,’ ” Anthony crowed into his palm like it was a radio. He laughed then pretended to grab Wilson’s dick.

“Bro, you know who those guys were?”

Anthony thumbed through his phone to a photo of him posing, the man’s forearm wedged under his neck. In the picture they’re smiling.

“It’s right here,” Anthony said, running two fingers along the sides of his neck. “Right on the carotid. I can knock a bitch out in ten seconds with that move, I don’t care how big.”

Anthony was sweating. Wilson could smell him in the air.

His eyes were shining.

The blood thudded in his head.

Anthony’s arm glided under his chin. He was surprised how warm it was, Anthony’s skin on his skin. There was a sudden jerk—his eyes shot open, the arm now, crushed against his cheek. Tight. Tighter. Anthony’s breath puffed heavily at the nape of his neck. There was another jerk, and for a second Wilson lost his balance. He took a step then felt himself catching, his body hitched against Anthony’s frame. The arm tightened. There was no air, no blood. Small dark spots crazed his vision. He could cry now, if his body knew how, his head flexing upward, looking at sky; this place, this place.

Bill Cheng is the author of Southern Cross the Dog, which was longlisted for the PEN Open Book Award. He was the recipient of a National Endowment for the Arts Grant and a New York Foundation for the Arts Fellowship in Fiction. 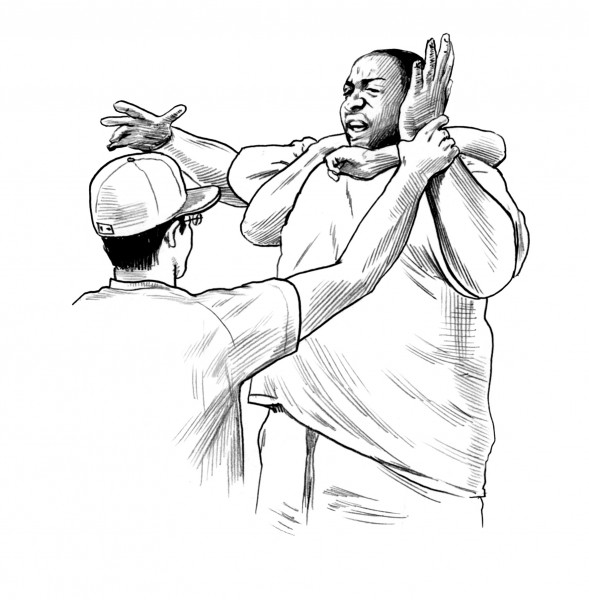 In the summer of 2014, Eric Garner died after New York Police Department officers pressed him to the ground while one placed him in a chokehold. In the six years since Garner lost his life, a grand jury inquiry, a federal investigation, and more than one internal disciplinary trial, only two of the officers faced some kind of punishment. One lost his job. Another lost her vacation days.

Bill Cheng on writing, risk, and how this story came to be