Doctor K. was not a hot man. But he was fit. He had a hot wife and a significant number of children. This was the kind of thing that either saved you or fucked you. But his present had nothing to do with it.

There’s a story he likes to tell when people ask what made him do it. Whether it’s true or not doesn’t make a difference. Because the point is real. The point of the story is holes.

As a child he’d watched his baby brother drown in a bathtub. His mother had been on some sort of painkiller at the time. She’d been folding laundry. His dad was not a part of the ensuing court case. His dad worked. Dr. K. (then Teddy) watched his baby brother, Leon, gasping. The widest of baby eyes. Teddy tried to call for his mom but his voice was gone. It was only a few seconds later that his mom came in. Or it could have been whole minutes, so the story goes.

Many thousands of years later Teddy was in Pennsylvania. He’d scrubbed the swamp off of himself. He met the hot wife and they fucked sweetly in her childhood bedroom in a house that had no problems. His hot wife liked big SUVs and unscented baby products. He loved her family. He started a brass practice and his in-laws gifted him a placard that said, THE BUCK STOPS HERE. Every day for lunch he did not flirt with the pharmaceutical reps who brought him lukewarm linguine with clams.

He knew he was going to jail at some point. He knew it was 70 percent about the money, about the hot wife. But there was an entire 30 percent—God help him—that did it for the holes the world bore into 40 percent of its citizens.

The first patient who was clearly med-seeking was a woman named Johanna. She was incredibly tremulous—he could smell the brine of the pills on her breath—but also she’d lost her two children in a plane crash. They’d been on their way to see their father who’d left her for an actual sixteen-year-old. Then there was Carly with bone cancer and Charlie with full-blown AIDS and Len with eighteen stents. Maybe nineteen, he didn’t know. And then it trickled down into the well whatevers. Rick the incel and Sarah who’d been ghosted more than fifty times in a year. Housewives with OCD and truck drivers with bad knees. They came from all over. They came from Kentucky and Connecticut and Florida. One came from fucking Munich. Annika only wanted one day of peace, please, she said, one day of fucking peace from the worms in my brain and I will give you one thousand dollars. I will suck your dick, she said. She said it in German and he didn’t get it but he lifted her from her knees and took her one thousand dollars. They arrived after midnight. They sucked on the Werther’s he’d placed in a bowl in the waiting room. They read Car & Driver. They crayoned adult coloring books. You looked through the little window and they were all so fucking happy.

The thing was, Teddy knew he was going to jail at some point. He knew it was 70 percent about the money, about the hot wife he was afraid would leave him for someone with bigger balls and a speedboat. But there was an entire 30 percent—God help him—that did it for that night with Leon. To fill the holes the world bore into 40 percent of its citizens. For the way his mother, in the gratuitous ambulance, shook an entire tinted capsule of God knows what down her throat, not yet realizing she had died. And Teddy did not yet realize that he had, either.

Lisa Taddeo is the author of the international best seller Three Women. Her nonfiction has been included in the Best American Sports Writing and Best American Political Writing anthologies, and her short stories have won two Pushcart Prizes. 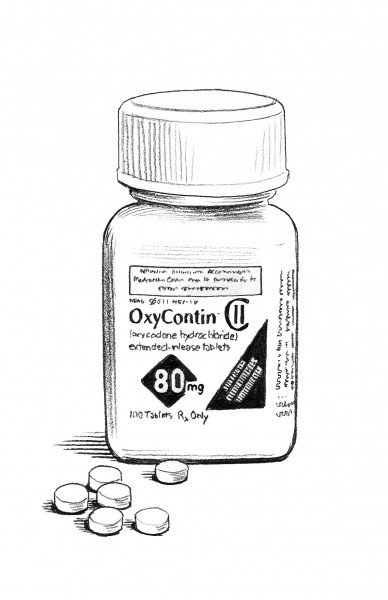 In late 2019, a Virginia doctor was sentenced to 40 years in prison for prescribing more than 500,000 doses of opioids with largely no medical reason, including those that directly caused the death of a patient. He was not the only one running such a scheme, called a “pill mill.”