All this slow water-torture business of stopping the world, clearing the territory, waiting for the bird to whistle across the sky, no thanks, no, not a thing going to infiltrate my mind, keep it clear, keep it focused, let them try, the lean-in, the step across the spot, the whisper near my ear, ignore it, let it go, all their great theater, the headfuck, thecalm step in front of me, the flash of orange shirt, the flick of hair, her thin headband, the pause, the turn of the

back, another flick of the ponytail, doesn’t bother me honey, this is me, there is only me, this is what exists in the here and now, only thing in existence, makes no difference what you say or what you wish or how you step or how you whisper, but migod the roar, the sheer decibel load, rattling the sky, my country ’tis of thee, we got the penalty, always place the ball a little north of the spot, who knows what a fraction of a second will do, the physics, the geometry, the speed, yes, place it just at the edge of the chalk, steal an extra blade of grass, back bent, fold the top of the socks, spin the ball in the fingers, get the panels lined up, symmetry, blue white red, blue panel in the middle, odd that, the leather feels cold, stay over it a moment, the whole world is watching, adjust the ball, roll it, don’t look up, let them think that I’m thinking, but think about not thinking, the paradox in the box, alone here, not alone, could go down the middle, no, go right go right go right, only me honey, you can’t touch me, was it a penalty, was it fuck,

high foot, sky foot, cloud foot, and even when it’s not it always is, and it was now and ever will be, Alex will have a studmark on her cheekbone, brave that, don’t mess up now, sixty minutes, good time to insert the knife, clinical, sharp, we have this, she’s good, van Veenendaal, what, three saves, four, she dived to her right for Alex’s shot, flattened herself, a cat, go right Meg go right, long legs, she just might bootsave, think now, pretend you’re not, just roll the ball a grassblade more, at least half the world anyway, migod the earshatter, their orange shirts, their orange flags, their orange hearts, the wastebag color, right, go right, Meg, almost certainly right, a pinoe, a peno, a grigio, make your mind up time, golden boot, and all that commotion behind me, all that roar in front, see nothing hear nothing say nothing, but migod the roar the roar the roar, children and lovers and wives and daughters and mothers, our country ’tis of thee, we want equality, comes the time comes the woman comes the referee, yes indeed, whistle in her mouth, a tiny nod, step back now slowly, oh the mindgames, don’t even think about that, not even once, gone, gone, gone, if I told you once honey I told you a million times, your swishing ponytail does nothing for me, think doublethink triplethink quadruple, leave me be, van Vee, waving her hands, all arms and legs and gloves, Veenendaal, you’re way too tall, but we’ve got the Empire State honey, she’s seen me before, two against Spain, left right, sorry Sari, bun on her head, makes her look taller, can’t fool me, keep it low, in the house, it’s mathematics, Meg, clinical mathematics, who’s on first you’re on first hit it first and fast and low, takes her longer to get down, get over the ball, don’t go high, she’ll save it easier in the air, a grass cutter, that’s what we want, down to your right, breathe now, always the endless second, a tiny spit, the lick of the lips, glance over the shoulder, merci madame,

Colum McCann is the author of six novels, including Let the Great World Spin, which won the 2009 National Book Award, and three story collections. His new novel is Apeirogon. 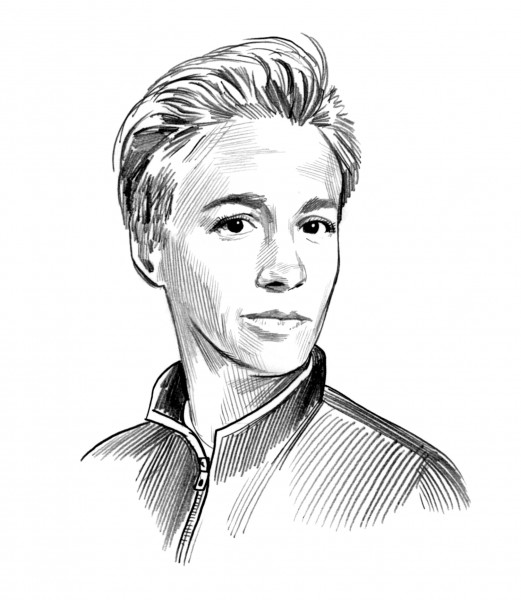 “In this incredible moment that I have, I would like to use this platform to unify people,” Rapinoe told The New York Times soon after winning the World Cup. “That doesn’t mean get everybody to the left, but I want to bring everybody to the conversation, and the basis of it is equal rights. My big, I don’t know, ‘message’ right now is that every person has a responsibility to be a participant in this society and make it a better place for everybody, in whatever capacity they can.”