A murder had taken place. We gathered around the oak table. The host of our Mardi Gras party had been found strangled in his bedroom with his own necklace, a beaded antique. The suspect was on the loose. I was not sure what part, if any, I’d had in the crime. Gaudy strings of purple and blue beads hung from the chandelier, which cast a yellow light on the table. I was wearing blood-red lipstick and a fur coat I’d found in my mother-in-law’s closet that stank sharply of perfume. I poured myself too much wine, then gulped a good third of it down. Something heinous had happened, all right, but it was not the murder, which was an act-out, murder-mystery game that Sarah, my mother-in-law, had ordered from the internet. The heinous thing was that every other hour the phone rang in the adjacent sunroom and Sarah, with her shock of white hair, hobbled over to cradle the receiver and after a pause gave the order for another deportation.

The pandemic wasn’t slowing; immigration judges like Sarah had resumed reviewing asylum cases, except they did it over the phone. Brandon and I, along with his sister and grandfather, were staying at Sarah’s house to keep her company. She was newly lonely after a bad divorce. Each day I convinced myself that I would be gracious. Instead I woke up and relived the pain of my own migration. Sarah tethered herself to the landline. Her face puckered in attention as she listened for what seemed to be mere minutes; then, she’d speak. A single pronouncement—that’s all it took to undo a life.

I couldn’t separate Sarah the person who was Brandon’s mother from Sarah the person who enacted the border’s violence, undisturbed, in a golden-streaked room. Sarah and I had a troubled relationship from the beginning, and in close quarters it worsened. Brandon looked on, helplessly inert, unable to toe the line between his duty to his mother and his protection of me. I prickled at Sarah’s presence, chased myself out of rooms when she entered them. And while the murder mystery forced me to remain at her side, I looked everywhere but in her direction.

Bourbon, Brandon said to me in a bad French accent, as he returned from the bathroom where he had gone to draw a thin mustache over his lips with my black eyeliner. His hair was spiked with gel that smelled like hand sanitizer. I pushed my wineglass toward him. Yes, please.

No, that’s my name—Bourbon. Jazz musician. And you? He grasped my fingers and brought the back of my hand to his lips.

Brandon smirked. For the first time since shelter-in-place began, I smiled too. It was a taste of what we had been like together, in the before. Even the cook chuckled in our direction. Brandon’s grandfather was wearing a bathrobe, a band of paper taped around his forehead from which white tissue paper fluffed into the air in the vague shape of a chef’s hat. Brandon’s sister was clownish as the family attorney in a suit her father left behind. Sarah wore fishnets and a dress in her best impression of a widow pivoting to sex work. At the mansion of the recently murdered Alfonse Durand, my character was the wildly popular novelist of the Queen of Blood series, which had earned her millions and a cult following. I was a writer in real life, too, though my millions and cult following had remained elusive.

Like in all murder mysteries involving mansions and estates, there was a will. The person getting the most money was the attorney, followed by me, then the cook, the maid, the musician, and the widow. We read little speeches from the game booklet that attested to our whereabouts at the time of the murder. We interrogated each other. Everyone had a motive, but not everyone had the cold blood of a killer. The attorney sucked on one end of an unlit cigar. The cook had the opportunity to poison the food, she said, and released invisible smoke rings into the air.

The widow tapped her chin in faux reflection, then said to me, You have the most to gain.

Second most, I corrected, finishing my wine. But you are the most capable of killing.

The room hushed. My words had sounded earnest in a way I knew I could not take back. It was obvious to me that while everyone else had taken pains to create a character from scratch, I had simply transferred my real emotions into a foreign container. I stared at Sarah, wanting, finally, to double down on what I had said. Nothing could make me unlearn that if Sarah had reviewed my case she would have denied it—she would have deported me. When Sarah shared this information with me, she feared I’d misunderstood. I meant, from a legal standpoint, your proof of fear is frivolous; personally, I am so glad you are here.

We interrogated each other. Everyone had a motive, but not everyone had the cold blood of a killer.

I walked out in rage, and her children tried to demystify for me what had happened. Mom was only talking about like in court, you know, when it comes to laws.

In Sarah’s house the law was spoken of like an alien force that influenced us. When I asked her about Trump’s latest immigration proposal to change the meaning of the word “persecution,” she told me: It is the presumption of justice to narrow the definition of a word so as to best define its legality. It was blind luxury to think of the law as something dispassionately fair. Meanwhile, I knew that actual, breathing people had sat down to clarify that persecution no longer related to criminal or military strife; it was more intense, you might even say evangelical—as in the fear one might experience if one were pregnant and in danger of a forced abortion, or one were in imminent danger of state-sanctioned torture for holding a particular faith.

The festive metallic streamers grinned at me from the ceiling. I waited for what Sarah would say. Her eyes watered in a way that was familiar. This is what happened now when you told the truth.

The cook was scrolling through his phone, the only person present in the room unaware of the tension. Sounds of shooting erupted from his screen. It’s a gunfight with police, he told us, looking up. Some looters shot some cops. From where I sat, I could see the shaky video, nothing too clear, just a blur of uniforms, the back of cars, people running.

Grandpa? Where’d you find that? Brandon asked. Was it on your Facebook? He asked like he was talking to a startled deer.

The cook was hypnotized by the screen. He twitched, like he had heard the words spoken at a delay. Yes. On my Facebook.

The cook didn’t blink. Looks pretty real to me.

I looked down at my hands, which were shaking; then the phone in the sunroom rang—the marking of another hour. Sarah pushed her chair away from the table, wiped the wetness on her cheeks, and entered the room tinged red now, with the falling sun. In the kitchen the bloodless cuts of steak were waiting, and cold. They looked gray to me now. The soup had grown a gel-like layer on its surface, like a lake aching to freeze. No one but me had made an accusation. In the silence of the kitchen I whispered to the soup: Persecution is persecution. And fear is fear is fear is fear is fear.

Ingrid Rojas Contreras is the author of Fruit of the Drunken Tree, a silver medal winner in First Fiction from the California Book Awards and a New York Times editor's choice. Her writing has appeared in the New York Times Magazine, The Cut, The Believer, Paris Review Daily, and elsewhere. She was born and raised in Bogotá, Colombia. 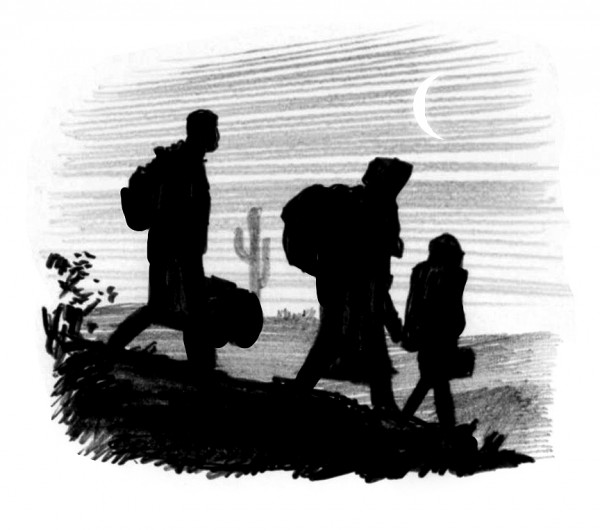 During the pandemic, most immigration court proceedings have taken place over the phone or on videoconference. Lawyers have said this has made it even more difficult to help their clients with cases as important as proving they need asylum from persecution.

Ingrid Rojas Contreras on how this story came to be, the language of immigration, and people who can move clouds