My restaurant is called Soul Good. I said is because I refuse to use the past tense. Our vibe is what if a Jill Scott song was a restaurant? I decorated the walls in the oranges and creams I associated with good music. I’d come up cooking ramen and pizza just long enough to be thrilled when a space opened up in Crown Heights and I could riff on the food I grew up eating. We sell a lot of biscuits, greens, and ribs to the black part of the neighborhood that moved up here from the Carolinas and Georgia a generation or two ago, but our most popular item is a seaweed-based gel that’s infused with black-eyed peas. It’s called The Black Eye, and it’s decorated like an enormous black-eyed pea. At $54, it’s a steal. The young white bankers love to roll up to the bar and say “Gimme a black eye,” and sometimes I do feel like punching them. But I don’t.

We celebrated our second anniversary in the first week of March. The whole crew stayed late on a Sunday night. I cooked them oxtails, citrus-spiked candied yams, and a lighter-than-air cornbread I made with cornmeal so pulverized, it was only one step removed from dust. We hugged. We high-fived. We dug our forks into a communal pound cake and chipped it into pieces. In three weeks, I’d be holed up alone in my studio, finding TV pornographic whenever anyone shook hands, but that night, like all the other restaurant nights, I touched everybody. We brushed past each other in the kitchen and dining room, we packed a table to eat between lunch and dinner service. In my apartment, the only thing that touches me now is my bed, when I get in after a long day of pretending the world might resume again sometime before my landlord crunches down on me and I lose the restaurant. I looked up a list of tips on how to feel less lonely when you’re stuck at home for what feels like forever, so sometimes I drag my feet on my kitchen floor to pretend someone’s rubbing them.

Yeah, the virus was out there, but everyone said if we washed our hands we’d be fine. I already washed my hands plenty. If the official medical advice amounted to telling us to listen to the health department, well, I had that covered. We, as people who didn’t work in healthcare, didn’t need masks. Maybe we did need masks, came the word a week or two later, but if we didn’t have one, we could just keep washing our hands. The mayor was still going to the gym and telling us to live our lives. The people who died were older or had preexisting conditions, even when they didn’t. The usual crowds packed the bar and the dining room. Sure, they looked a little more worried than usual, but it couldn’t be because of a virus too weak to win a staredown with ordinary hand soap.

I looked up a list of tips on how to feel less lonely when you’re stuck at home for what feels like forever, so sometimes I drag my feet on my kitchen floor to pretend someone’s rubbing them.

In the second week of March, we served forty tables a night. Twenty. Seven. My favorite regular, an older black guy who had the same weathered yet permanently excited look as my dad, wore a homemade mask that he’d shove under his chin when his food came. Sometimes I’d open the fridge and make loving eye contact with all the food no one was coming in to buy. The ribs. The icebox pies. The collard greens I’d serve traditionally for the people who reminded me of my parents and in a foam for the new school, all that punchy bitterness retexturized to melt in their mouths. “Should we close?” my sous chef said after the night we had seven tables, dooming most of the staff into a quest to find an exciting patch of middle distance to stare into. “I’ll get back to you on that,” I said, since I’m allergic to giving up.

The city got back to me on that a few days later, by limiting all restaurants to delivery and takeout. Is there a way to gently fire your whole staff? If I put on soft music, maybe they’d feel a second or two of comfort in our empty dining room before they marched back out there into the unknown. But instead of reverently soundtracking the moment, I gave them all two weeks’ pay and filed for a small business loan. $50K could get me through three months. In the meantime maybe I could package up the unsold food, sell it, and call the restaurant a bodega? A deli? I settled on larder, since it sounded more highfalutin, and the first step to justifying your food markups was to make people think they were dining on the moon.

Three people bought flour, one person ten pounds of yeast. Two of the usual banker types popped in for a black eye. The pork and beef disappeared overnight, the vegetables in a trickle. The larder made me half the money I’d hoped while giving me the upside of being exposed to people who might be sick. After someone came in not wearing a mask and coughed into their hand, I closed up the larder and delivered the rest of the food to a homeless shelter and a handful of regulars who had lost their jobs.

My small business loan was denied, which the small business loan people called “processing for a while” and I called an invitation to go fuck myself. “You’ll hear from us in another 400 days or so, but you don’t need the money that bad, right?” the small business loan hotline lady said on the phone. “You could always try selling lemonade. It works for kids,” she added. Maybe this wasn’t the end, I said to myself, but it sure felt like it. You want a black eye, woman on the other end of the phone? Well, bitch, I’ll give you one.

Kashana Cauley is a writer for the upcoming Fox comedy The Great North, a contributing opinion writer for The New York Times, and a GQ contributor. She’s written for The Daily Show with Trevor Noah and Pod Save America on HBO as well as The Atlantic, Esquire, The New Yorker, Pitchfork, Rolling Stone, and many other publications. 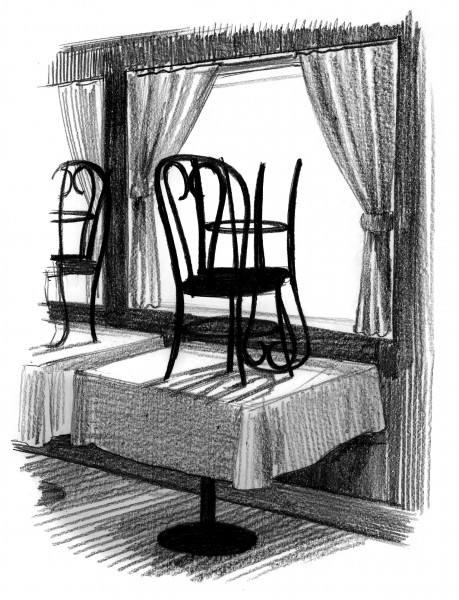 Restaurants have lost at least $80 billion in sales over the course of the pandemic, according to one estimate. And since restaurants may be able to reopen at only 50% capacity, fewer and fewer see a future.

As a result of the Covid-19 pandemic, 40% of all restaurants in the United States are closed, according to the National Restaurant Association, and two-thirds of restaurant workers—cooks, waitstaff, cashiers, dishwashers, and more—are out of work. With losses projected at $240 billion, it’s among the industries that have been hit the hardest. As owners apply for loans and chefs try to hustle together delivery (which likely won’t cover the bills), many fear that the restaurant industry as we know it may never come back. Here’s what several leaders in the dining world have said about the restaurant apocalypse so far: