As schools reopen across the country, parents are facing another round of pandemic fear...

The boy watches his reflection in the car door while he waits for his mom to unlock it, which feels like forever, watching his fat body stretch along the curvy contours of their Subaru, to the point that he feels a flash of heat in his cheeks about seeing kids, about kids seeing him again after all this time. He knows he’s gained some weight, he can feel it in his cheeks. He knows he’s not fat, not fat fat, but when he sits down in the car, as the engine starts up, he can feel his stomach jiggle in a way it never had before. It’s because he’s been inside so much and couldn’t run or tag or throw or push or pull or play against his friends, has not even really talked to any of them in what felt like two or three bad summers in a row, in what kept more and more feeling like the life before. His mom had told him plenty not to worry about his weight. But this she didn’t get: Telling him not to worry about his weight was her saying there might be something to worry about.

On this dreaded morning, there in the driveway, their bodies had moved slow out the door and into the car, hesitant as fall, as the summer keeps on, longer and longer every year, the boy had a better sense of what it meant that the world was on fire.

They’re over- or under-thinking all of what the disease could mean, which means they’re late his first day back, they lagged like the boy’s video games lagged when the internet was slow, dragging their feet about the boy going back to school, about her taking him to his possible what? His death, his mild sickness, his asymptomatic isolation in his room, getting food brought to his door and endless allowances of movies and apps and screen access. Nothing had been real these months, or it had all been too real. The boy saw it all as a good time to see better, that’s how he told his mom about what it could mean. It’s clearer what matters when all seems lost.

He wouldn’t have even been going back, it’s that the school is reopening, and other kids are going, some of them his friends, some of them he misses, wants to see. Plus it’s required by law, which, for some things he knew his mom thought: Who cares? Most of all it’s that his mom doesn’t have any options; she needs him to be in school while she works. Vance, her manager, openly hated children. She’d asked if she could bring the boy in, the sitter had backed out suddenly and her backup had at first said yes, then backed out herself last minute. The restaurant she worked at was upscale, served only brunch and lunch, with the kind of upscale, elderly clientele who don’t even eat dinner, but supper. Vance had said he couldn’t risk having a kid burst out from the back like a wild animal. These people had heart conditions. She told the boy this was why he had to stay home alone, that first time he had to stay home alone, that first time she left him there that whole shift.

“Why does it feel like reopening schools is like when I—which I know you hate—pick off a scab and the thing opens back up again and I have to start all over again?” the boy said, looking out the window from the backseat, deciphering what he could of the news his mom never stopped listening to, the news voice always with them, in the car and at home, and every hour of every day, new news always mostly just new, and bad news always just bad, and good news if ever, then never for long.

The reentry into the reopening all felt like some backward kind of wound. A backward wound is for some reason not healing.

“If staying home alone and not going to school, us finding a homeschool for you, if that feels like an option for you, we can—”

“I don’t wanna stay home and homeschool. That sounds terrible.”

“They say, you know, that they don’t think kids can really . . . ” she said, about the virus, but didn’t finish the sentence.

“That’s how they really feel,” the boy said.

“That’s how they really feel about us.”

“That’s the point. Everyone thinks they won’t get it and are willing to gamble with their kids’ lives, but even if it’s a small percentage it’s one that adds up to a lot of kids whose parents don’t think they’ll get it.”

“People love their kids!” she said, way too enthusiastically, then a pigeon flew by, swooped across their view. She hit the brakes too hard. Both of their heads went forward from the pull, almost like they were bowing, then she sped up as if to compensate.

“People hate their kids,” the boy said. And then it was as if some other thing had just then swooped in front of them, some blinding light, the truth of which they couldn’t then see through, not then, not how they were before the countless seasons of sickness ahead of them. Much later, at those spare moments between, when memory creeps up, the boy would return to right there in the car, with the pigeon then the brakes, the hating or loving of kids, and the approach to the abyss that was his reentry, as they accidentally bowed to gravity’s pull in the car just waiting for the pull to abate. The reentry into the reopening all felt like some backward kind of wound. A backward wound is for some reason not healing. This whole memory would end up meaning something, more and more each time it came to the boy, as he became less a boy, the memory more and more meaningful as less and less explanation seemed the point. It’s that there are scenes, moments in our lives we can’t not keep remembering, and some of them tell us something about ourselves, and some, more than we’d like to admit, tell us how much we not only don’t but can’t know at all.

The boy walked away from the car without looking back. He wanted his mom to feel bad. This was new for him. They’d been so good to one another over these most recent years, remembering how it’d been when the boy’s dad was still around. It bonded them, to be rid of him, to be out on their own, away from his moodiness and abuse, from his drinking and wrath. The thing the boy was mad about was this impossible thing. This new life. He didn’t want to stay home or go to school. He didn’t want life to return to what it’d been before, but it couldn’t stay like it was, that wasn’t living, that was waiting. He knew he shouldn’t have blamed his mom. It was that she’d used the words he’d heard used by the gross old white men in the news, taking advantage of vulnerability as gross old white men were always wont to do. He’d heard it called rhetoric. His mom used that word for what other people did when they repeated the newspeople. But here she’d used it herself, the rhetoric. Against her son.

But he didn’t get sick that day. One student did, in his grade, in his class, and they sent everyone home, so he ended up home alone anyway. He watched a lot of YouTube those first days home alone. And he played with his toys in the backyard, a game he loved to play on his mom’s raised beds, where she kept meaning to start a garden. He’d have his guys rise up from the ground like zombies. Usually he had the guys he liked most, his toy mutants, one half-alligator half-human named Reginald and a half-tiger half-human named Beast Bob, normally they’d defeat the dirt-clod, freshly risen zombies, but one of those first afternoons where he ended up home during his mom’s shift at work, he had all the zombies be people who died from the virus, and that time, they got their revenge on the living. They killed Reginald and Beast Bob and made a new life for themselves, one without dying or disease, resurrected lives, and sure they were zombies, and sure they’d died when they didn’t have to, but they were back, they were here, they were alive, and that felt as close as he could get to a resolve, something to answer the question this new, impossible life imposed, when, freshly nine, the virus came and took everything he’d known it all to mean. But here he was, he was still here, and his mom was alive, and school be damned was her attitude about what to do about all of it, he could do what he wanted at home alone. Let them come, his mom had told him, as if the authorities had the capacity to worry about their little family, and it’s what he had Reginald and Beast Bob say before the zombies rose out of the ground, his good-guy zombies post-coronavirus, post-life. Let them come, his favorite toys had said to the zombies, before letting them kill them, they said to the rising zombies, his least favorite toys, Reginald and Beast Bob said to them, Let them come, let them come back.

Tommy Orange is the author of There There, which won the PEN/Hemingway Award, was a finalist for the Pulitzer Prize in Fiction, and was named one of the ten best books of 2018 by The New York Times. He is an enrolled member of the Cheyenne and Arapaho Tribes of Oklahoma and currently lives in Murphys, California. 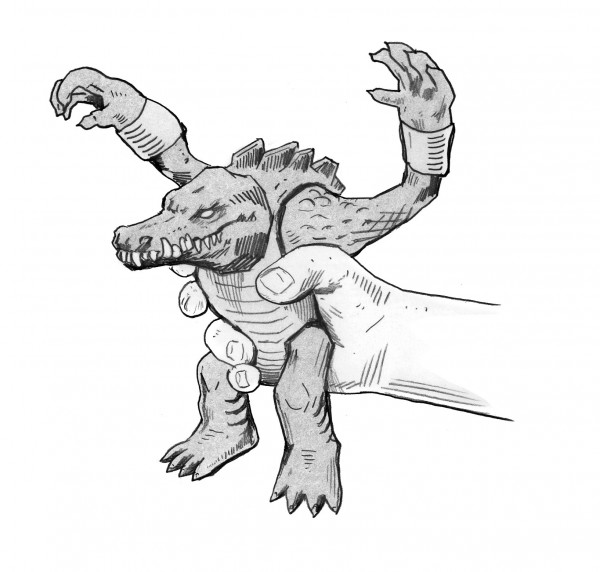 Researchers worry that keeping children out of school may leave lasting damage to their education and health. Yet numerous American schools that reopened for the new school year were quickly shuttered after experiencing significant outbreaks—sending kids back home to their online classes, video games, and lizard-beast toys.

Tommy Orange on school reopenings, Covid, and what kids are actually thinking