“Thank you, sir. For everything.”

After managing to get the words out, he hangs up the phone and looks through the window to the dome of the Naval Observatory. He wonders how much houses in Muncie, or maybe Carmel, are going for.

The conversation took maybe two minutes, less than half the time he’d been on hold, but now here he is with everything changed. He turns to regard the framed pictures of his three grown children, consoling himself with the thought that all those tweets calling them Half and Six and Tup—and offering them conversion therapy to homosexuality—will now, after almost four years, start to subside.

Karen had warned him that, when the end came, loyalty would be no defense. He’d be dropped no matter how many times he had displayed that reverent gaze when listening to the Prodigal’s speeches. The look had been modeled on something he had the chance to witness at an event in ’88, during his first, failed congressional campaign: Nancy Reagan watching her husband. Twenty-eight years later, during the fall of 2016, he trained himself to stare serenely at the back of the Prodigal’s head while silently reciting the biblical verses inside his own.

He wasn’t told who’ll be replacing him. Haley, he thinks, is too smart to say yes, and Jim Jordan will make the mistake of appearing lustfully eager when the prize is dangled. But after a minute or two he’s bored with trying to predict his successor on the ticket. Long before he underwent his own sort of conversion therapy—being slowly born again from Catholic to Evangelical—he’d been taught that despair is a mortal sin, and maybe despair is what he’s starting to feel, because he knows there’s no longer any political place for him to go. He had known the end was near a week ago, when the Prodigal put the coronavirus in his portfolio—to infect him with it politically.

Tonight, however, from Maddow to Hannity, all talk will be of the Prodigal, the disrupter, of whatever bold calculation supposedly lies behind the switch.

But did the end really lie all the way back at the beginning—four weeks before the last election, when the Access Hollywood tape came out and Priebus panicked into thinking that the RNC could dump the Prodigal and give him the nomination, with Condi Rice taking over the VP slot? That wasn’t the exact scheme that had been floated, and (much as he liked the idea of merely having pawned his soul instead of sold it) he hadn’t exactly agreed to it. But it’s what Woodward put in his book, and the Prodigal always believes reports of treachery no matter the source. He’s saved his vengeance until now, not because he has the patience or subtlety to serve such a thing cold, but because he needed three years of blind fealty in between.

It had to happen in any case. With too much hair and too much weight and too much mouth, the Prodigal is like Blagojevich, who rotted in federal prison in Colorado because of an inability to resist selling Obama’s Senate seat in ’08: I mean, I’ve got this thing and it’s fucking golden. How could the Prodigal, who’d once put Blagojevich on The Celebrity Apprentice, resist the sheer showbiz spectacle of snatching and re-bestowing a vice-presidential nomination that was indisputably his to giveth or taketh away? (Job 1:21) Last month’s pardon of Blago was like a promo for what’s happening now.

When will he announce the change? Today, of course—more show business: the day before Super Tuesday, when the Democrats will be trying to decide, in fourteen states, between Bernie’s Bolshevism and Biden’s blarney. Tonight, however, from Maddow to Hannity and from sea to shining sea, all talk will be of the Prodigal, the disrupter, of whatever bold calculation supposedly lies behind the switch. And when someone asks him why the 48th vice president of the United States will not be on the ballot this fall—will instead be dust returning to Hoosier dust—the Prodigal will say, as he always says, whether you’re Sondland or Scaramucci or Manafort or Jeffrey Epstein: “I really didn’t know Mike Pence very well.”

Thomas Mallon is the author most recently of Landfall, the third novel in his Washington trilogy about Nixon, Reagan, and George W. Bush. His honors include Guggenheim and Rockefeller fellowships, the National Book Critics Circle citation for reviewing, and the Vursell award of the American Academy of Arts and Letters. In 2012 he was elected to the American Academy of Arts and Sciences. 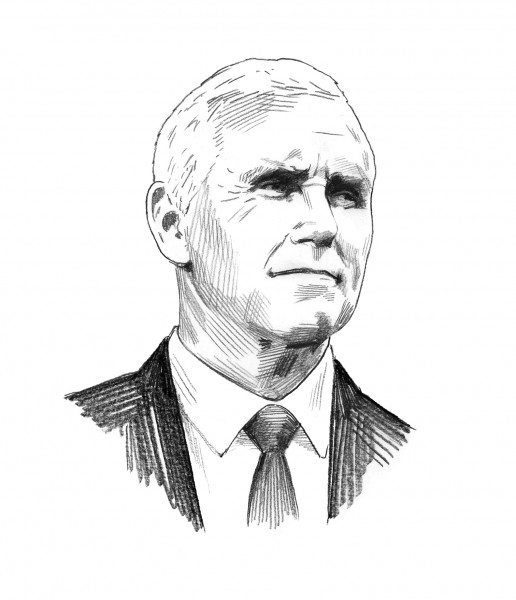 Aside from the aftermath of the Access Hollywood tape, Mike Pence has been seen as an unwavering servant to President Trump—a close adviser and someone who, unlike many other government officials, refuses to leak negative intel to the press. But recently, rumors from within the administration have arisen, alleging that Trump may replace Pence for the 2020 election with former ambassador to the UN Nikki Haley.