Shari checks her phone, but, though it is charged, it’s still not getting a signal. In the passenger seat, her aunt Berlinda gazes out the window at the long line of stilled cars ahead of them, brake lights glowing in the gray air. Her mouth is open, her white hair a fragile cloud around her face. Cinders batter the windshield, a flake of ash the size of her hand. When Shari flicks on the wiper spray, the ash smears into black sludge, and the taillights smear, too. Behind them, to the north, an orange glow at the horizon, an unnatural sunset.

In the backseat, Jeff hugs himself. He will not look out the window. His desktop computer is on the seat beside him, their compromise. Her forty-two-year-old boy.

Shari pulls her husband’s number up on her phone again. In the picture, he’s on his friend’s boat three summers ago. Fish, beer, smile. In a fury, she thumps the wheel, blasting the horn. Jeff moans. Up the line, another horn responds.

Shari was prepared. The go bag was in the trunk, along with the extra can of gas. Their birth certificates and insurance cards and the deed to the house.

The evacuation orders did not come the usual ways. This morning, the Sheriff’s Department sent bullhorns through the neighborhood. Shari stood on the porch scanning the sooty sky, the grapevines waiting in doomed rows on the hill across the road, then ran inside.

“Jeff,” she called, voice cheerful, pulling food from the refrigerator. Apples, lunch meat. She dumped Berlinda’s pill bottles into the grocery bag. “Get your sneakers on. We need to leave in three minutes.”

“Today, this is not a choice.” She stood in his doorway. He was hunched at his computer, despite the fact that the power had been shut off for two days. “Honey. This is the evacuation we talked about. Sneakers on, please.”

“Come on, Tía.” She lifted Berlinda to sitting in the hospital bed in the living room, swung her legs around. She said the same things she says every morning. “Up, up, steady on those pins.” The two of them shuffled the three steps to the commode, and Shari lifted the nightgown around her aunt’s waist.

Settled, her aunt looked around as Shari rushed here and there. She clutched the bunched fabric at her lap. Her hands shook. “I didn’t sleep too good,” Berlinda said.

“Tonight will be better. You always have a better night after a hard one.” Tonight they’d be in a motel in Santa Rosa if they’re lucky, in a shelter if they’re not. She knelt at her aunt’s feet, yanking up socks, pushing swollen feet into shoes. “Jeff! Are you ready? We need to go. Listen, Tía, I’ll be back to clean you up and then I need to get you in the car.”

“I can’t go outside in my nightgown!”

“I’ll pack fresh clothes, and you can change on the road.”

Shari paused in her packing, checked her phone. Her husband was, last she heard, staying with a woman in Healdsburg, also in the evacuation zone. She wasted a moment on worry before the rage ripped through her. “Jeff, we have to go.”

Precious minutes drained as she rolled Berlinda down the walk on her walker, settled her in the car, collapsed the walker, and negotiated it into the full trunk. The acrid wind whipped her hair.

Inside, her son crouched by his bedroom door, moaning. “In the car, Jeff.” His shoes were finally on, thank god, and he gripped his backpack. “Jeff. Now.”

His face was buried in his knees, his bald spot exposed. “No, no, no.”

The line of cars doesn’t move. Shari won’t turn around, but in the mirror she watches the sky glow redder behind them.

Above them, on the highway, the cars inch along. Here, they are at a standstill, half a mile from the entrance. When the car ahead of her rolls forward, hope lifts in her, and then the cars stop again. Behind them, the red of the sky deepens.

Soon, soon, Shari will open the door for her son. She will assure him that she will keep his computer safe. She will point the way. Run, she’ll tell him.

Kirstin Valdez Quade is the author of Night at the Fiestas, which won the John Leonard Prize and the Sue Kaufman Prize for First Fiction. A recipient of the American Academy’s Rome Prize and a Rona Jaffe Foundation Writers’ Award, she was honored as a “5 Under 35” honoree by the National Book Foundation and teaches creative writing at Princeton. 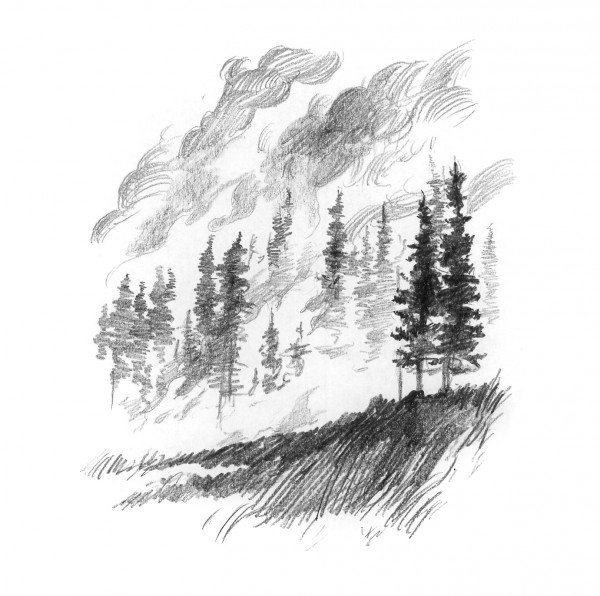 With the novel coronavirus crippling annual fire preparations, such as postponing controlled burns, California could face a more extreme season in 2020 with a smaller firefighting force.