Covid-19 has made us all prisoners of our homes. And at times, our families. If the...

My wife loves to travel; she always has interesting stories about a soup she once tried in Hanoi and what it was like to crawl up the steps of a temple in Tibet and so on. One time, on the grounds of Angkor Wat, a Buddhist monk gave her a red bracelet, told her it was good luck. It was a piece of string, really, but she loved that string and it seemed to love her because month after month, it stayed wrapped around her slender wrist, even as it thinned to nearly nothing.

Every night, just before bed, she would take off her watch, set it on the nightstand, and when she turned to smile at me, I stared at her wrist, trying to understand how that string could withstand the rigors of being attached to a human body. The string was spiting me by hanging on. I began to ask her hypotheticals about what she would do if I tore the string. I asked her if she loved me more than the string. “Are you having a midlife crisis?” she asked. It was a reasonable question. I had recently purchased a ridiculous car.

One evening, after we drank a bottle of red wine that we got from a small vineyard in Tuscany where the owner cooked us the most incredible meal we have ever eaten and got us so drunk that we bought an unfathomable quantity of wine, I tugged on the string gently and my wife tensed. “This string has brought me so much good luck,” she said. “It brought me you. I don’t want to think about what might happen when it falls off.” I turned away, my body a long line of irrational anger. And from that day on, the string became my nemesis. I stared at it and conspired against it and waited. But then.

When the quarantine began, we weren’t really worried. We have a nice house. We have Netflix. We have books. We have each other and we’re quite good at sex. We would amuse ourselves. Every day, soldiers dressed in protective gear left a box of rations and four large containers of water on our stoop. The rations were uninspiring, too salty, industrial. Once a week we received fresh produce, but it was never interesting, only things like spinach, cabbage, kale, pears. During the first few weeks, we pretended we were on a cooking competition and tried to make the food palatable, but there is only so much you can do with rice and beans and dry graham crackers.

The soldiers were brusque, efficient, and ignored us when we tried to talk to them, glean some information about life beyond as far as we could see. The street was empty and quiet save for the military. The helicopters going in and out of the nearby heliport were gone. There were no sirens wailing. That was the worst part—the sound of nothing.

We just smiled at each other wanly, shrugged, like, pandemic, what can you do?

To keep ourselves reasonably sane, we developed a routine. In the morning we trudged up and down the stairs for forty-five minutes and lifted hand weights. It was important to stay fit, we decided, just in case we eventually had to fight for our survival. We’d shower, separately, most of the time, and then catch up on email, do some work because it seemed like work still mattered or we needed it to matter so we could believe that eventually the quarantine would end and our lives would be waiting for us. Quarantines in other countries had already ended so we weren’t deluding ourselves. When we got bored with work, we watched a TV show or movie. We played a lot of board games and sometimes got testy with each other. We had to stop playing Uno entirely.

Neither of us were particularly fond of our own nudity, but some days we didn’t even bother putting on clothes. Or we wore outlandish outfits. When we got stir-crazy, we ran around our small backyard, really just a patch of concrete with some nice outdoor furniture, a firepit, and a grill. We burned things and it felt good to commit small acts of destruction. We ordered things we didn’t need from Amazon because they contracted with the military to handle their deliveries during the quarantine and the military gladly took their money and we knew we were complicit in something but couldn’t say quite what. We took to spying on our neighbors in the huge apartment building across the way and they took to spying on us. We saw some things about the ways other people live their lives and many of those things were terrible. Some days, we ventured up to the roof, looked around and saw people for blocks in every direction, also standing on their roofs. No one tried communicating. We just smiled at each other wanly, shrugged, like, pandemic, what can you do?

My wife and I had a lot of sex. That never got boring. Every freaky or weird thing we had been too shy to try was suddenly part of our repertoire. I put my tongue in places I still thrill to think about. She was suddenly more demanding, less demure, like she was determined to draw as much pleasure as she could out of me. I was more than happy to oblige. We did not fight much at all because we’re in our fifties and understand the importance of not wasting time.

There was only one news channel in those days, and the journalists broadcast from their homes so they didn’t have much to say. Once in a while, a small child would toddle in the background, having escaped the watchful eye of another parent or a sibling. That was nice; a reminder of why we were doing this thing at all. Mostly, the journalists parroted whatever talking points they were given by the government, how the quarantine would last for a year, two at the most, while the vaccine was developed and tested and manufactured in mass quantities.

The rest of the world had a vaccine, but the American president had angered so many world leaders that they left us to our own devices and helped each other instead. Whenever he gave the nation an update, the president looked unwell, like his genetics were revolting all over his face and extremities, so that gave us some hope and cheer.

Fifteen months into the quarantine, the red string remained around my wife’s wrist. It drove me to distraction. The vaccine was ready. One morning, we received a note with our daily rations—a medical team would be bringing us the vaccine at the end of the week. “See?” my wife said, one evening as we watched a Spanish television show about angry teenagers who seemingly didn’t have parents. “We’re alive because of this string!” She raised a fist triumphantly. The string, desperately frayed, taunted me.

I clenched my jaw and inhaled deeply. I willed myself not to pluck it from her wrist. It would take no effort at all as it was barely hanging on. I wanted to say we were alive because of our isolation, general good health, and daily calisthenics in and out of bed, but she looked so calm and assured. I could not take that from her. Or even myself.

Roxane Gay is the author of four books, including The New York Times best sellers Bad Feminist and Hunger. She is also the author of World of Wakanda for Marvel. A contributing opinion writer for The New York Times and the editor of Gay Mag, her writing appears in Best American Mystery Stories 2014, Best American Short Stories 2012, and Best Sex Writing 2012, among other publications. 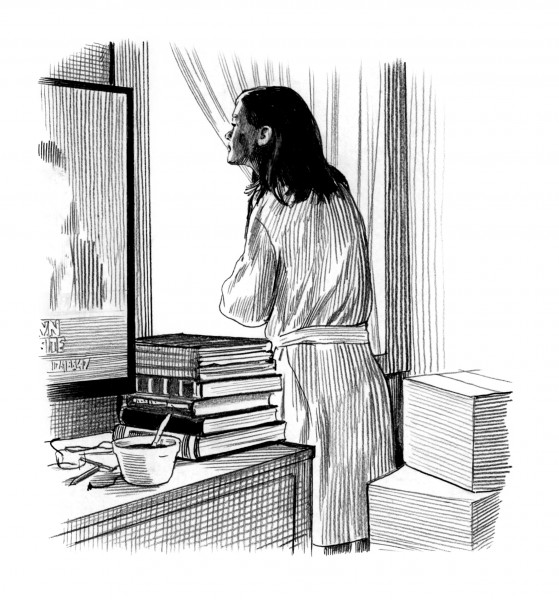 In the wake of the outbreak of a novel form of coronavirus, Covid-19, Americans who may have been exposed to the disease have been mandated to go into quarantine at military bases or hospitals, or to isolate themselves in their own homes. While there are no public plans to shut down American cities, China has shut down large swaths of the country in an effort to stop the spread. Across the globe, schools and businesses have closed, and some streets have been left largely vacated.

On pandemic life, Black Lives Matter, and how quarantine has made her relationship even stronger