We told them to go where they’d like, but to be ready to play April 15. This was bound to blow over in a month, we thought. By we, I mean me and the bench team, a bunch of walk-it-off guys who came up in the eighties. But in this case, we meant the front office too, the money guys and the moneyball ones and the boss, Stephen Smith, who had weekly calls with the commissioner under normal circumstances. They’d been talking daily this spring; I’d bet he and Manfred were crying into their coffees together, first about the Astros and now this. When I saw Smith around the complex, staring at his phone even as he wove through the Cactus League crowds (fanny-packed retirees and kids looking for sigs, day-drunk stag parties and ladies of a certain age), the boss looked green around the gills, queasy before any of the rest of us knew to worry about fever and dry coughs and N95s.

​Some of the team stayed in Arizona when they finally called off spring training, guys who had second or third homes up in the foothills, infinity pools and golf memberships and better home-entertainment systems in Phoenix than L.A. The optimistic ones, the guys who the guys on ESPN were saying were going to have career seasons, they drove on to California, hoping this pandemic thing would land better than everyone was saying, that America could squish it back into an epidemic or an outbreak or something that’d go away with a double dose of Tamiflu. The ones whose wives had refused to raise their kids in Southern California made a beeline back to their year-round spots in suburban Texas or rural Oregon. One fella rented a Mustang and drove straight through to Alpharetta, Georgia—he said he would rather have oral surgery dry than go through Hartsfield-Jackson in March in the year of our Lord 2020. When we called them about the Arizona plan, these young dads were the first to say yes. During the off-season they carved turkeys and strung up Christmas lights and played Santa, sure. Maybe they were on half-assed carpool duty, taught their kids how to throw. But they’re only seeing their offspring a few hours a day, a few months a year—during the season it’s FaceTime lunches and a couple family trips to the stadium, maybe a midseason off-day at Disney. None of this 24/7 parenting. My first baseman in Georgia? When we talked, he said that oral surgery was starting to sound good.

​June 1, they were saying now, that’d be Opening Day. We told them to get back to Phoenix May 15. And here we were, pretty evenly split between bedraggled and jumpy as fuck. “We can still get in 100 games, guys. That’s awesome.” I clapped my hands and paced the ballroom stage and said it loud, like I meant it: It was great, playing for empty stands in Arizona peak summer, risking our necks for some fat broadcast contract. National good, that was what the commissioner was saying. We’re bringing the country back. It’ll bring the sports bars back, I’ll tell you that.

​Each ballplayer was sitting at his own ten-top, and I could see them doing the math in their heads, ticking it off on their fingers. Rubio, our backup left fielder, was making the Major League minimum, 563. Divided by a normal season, that was around 3,500 a game. Times 100: not bad. Preston, who folks were calling the next Aaron Judge, was making ten times that, locked into an eight-figure deal through 2026. He’d arrived back at camp with the quarantine 15 making him look more Pillsbury than powerhouse. Sure, that video of him doing squats in his backyard with his dog had made it around Twitter a half million times, but the golden retriever was doing more to hide his master’s beer belly than benefit the man’s quads.

National good, that was what the commissioner was saying. We’re bringing the country back. It’ll bring the sports bars back, I’ll tell you that.

​“This is going to be our home base for the season.” I did my best Vanna White, which got a chuckle from some corners. We were assigned the Scottsdale Hilton, which was no Biltmore, but also not the Days’ Inn of Peoria. I considered it a fine deal, all things considered. “The league would prefer you eat up in your rooms, but if you want to eat down here, you can. See where you’re sitting now?” Brees, the clubhouse manager, had put out little table tents with each guy’s name and number. Thought it was cute, but right now the squad looked more like a bunch of sad-sack attendees at a dick-pill convention. “That’s your spot. I know you guys love each other, but keep your distance. No holding hands, no sharing plates.” I stopped my pacing. “And no girls.”

​You could’ve heard a bunt rolling in that room. God, my guys were miserable.

​“Cardozo! What did I just say?” Our backup catcher, Jimmy Cardozo, was so old he could barely squat behind the plate, but still led the team in the lothario department. Also a good cheerleader, and I knew we’d be needing that. The commissioner said teams could keep 40 active the whole season. In my calls to roster spots 27 through 40, I pitched it as more men getting a shot at the big time, but everybody knew it was because the league was expecting players to get sick, to have to self-isolate for two-week stretches, maybe more. What if three infielders were taken out by a double play? Or the whole bullpen got fevers at once?

​“Screens only,” Jimmy shouted back, holding up his phone so we could all see his muse of the moment. That got a chuckle. We’d have 20 guys suit up each outing, even the moneyball guys agreed to that. That’d keep the others safe—and keep them from sweating through their uniforms. For all of MLB to play in Arizona, every stadium—and I’m talking major and minor spring-training camps, plus the D’backs stadium, plus the ASU field, and I heard they were even looking at a goddamn high school park—would be pulling doubleheaders, seven days a week. Which meant half the time we’d be playing in 100-degree heat. Plus. Forget the virus, I was going to lose my guys to heatstroke.

​“Close enough.” I clapped my hands together. It echoed against the far wall. “Don’t forget, temperature checks at nine tonight. I’ll see you jackals bright and early, at the park.”

Emily Nemens, the editor of The Paris Review, is the author of The Cactus League, a New York Times Book Review Editor's Pick. She was previously the coeditor of The Southern Review. Her work has been published in Esquire, n+1, The Gettysburg Review, Hobart, and elsewhere. 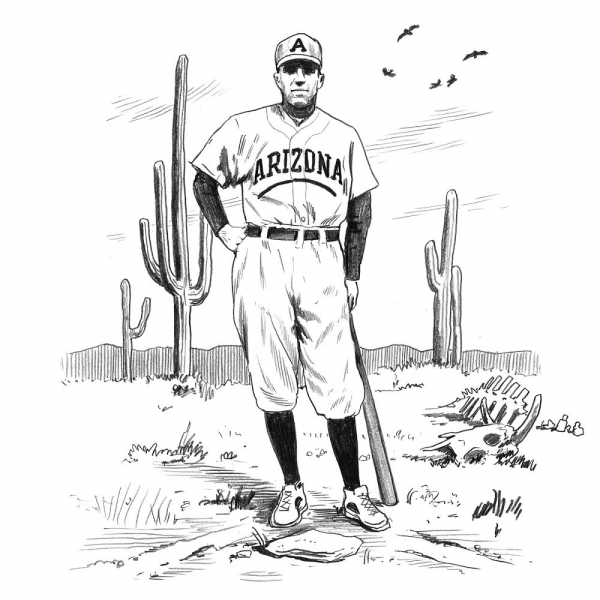 One option Major League Baseball is considering to start its season during the Covid-19 pandemic is creating a closed community in a city like Phoenix, where players would isolate in hotels and play games mostly on spring-training fields—without fans present.