I am watching a coyote gnaw at our lemon tree. At least I think it’s our lemon tree, I can’t be sure, but it’s definitely not our coyote. If you face out from the south rotunda on the Bel-Air Country Club side, you can see the pool on the left and the fire pit and then a smattering of lemon trees before the grass slopes into the golf course. It reminds me a little of Tory’s estate in Antigua except instead of smacking into ocean, you smack into grass. Clearly, the coyote is rabid and far from home. It needs to be put down. But I can’t call anyone, I can’t even have our groundskeeper call the club’s groundskeeper. Best-case scenario, whoever comes to take care of the coyote finds out who I am, tells the press, and it becomes part of the joke. Worst-case scenario? Whoever comes already knows who I am, traps the coyote, and sets it loose in the master bedroom.

Someone, please, tell me the difference between house arrest and house inertia. And don’t make a Full House crack, I’ll scream. I will say that my trainer is loyal. He comes early, his Tesla massaging the gravel on the back driveway. But since the college admissions scandal broke—and how strange it is to refer to something that happened in one’s own life somewhat casually, like an ATM withdrawal, using other people’s linguistic netting—I haven’t gone to a single event, not a single social occasion. You think I’m not invited anymore, don’t you? People who have not lived and worked in L.A. do not understand the machinations of this town. We like our hierarchies as much as the English, but we’re ultimately like the French, very forgiving, very hopeful that our disgraced populace can still be of use at a dinner party or that they will have long memories of warm behavior (“I was always on your side, Lori”) when it's time for a comeback. This does not include groundskeepers. Obviously.

What I am is a woman who used her household income to help her kid. If that’s privilege, let’s lock up every mother who builds a diorama for her kid.

The issue is how you are let back in, under what circumstances. Olivia will be fine. I can see it already. This is America. She’s gotten more YouTube subscribers and more agency interest in one year than I have...ever. There’s been movie interest as well, but we’re waiting for the Sofia Coppola treatment, for a real auteur to tell her story. I am different. I am a sideshow freak. I cut the line. I am the engineer. Galas and fundraisers are one thing, but I am a victim of cancel culture, and there is no surviving a bite from this new beast. Oh, and I could go to jail for forty years I don’t have, so that’s been a fun stress diet. But you know what? I don’t regret it, stop asking. Let me tell you something. People have gotten overexcited about me in all the wrong ways for my entire life, and this is no exception. They loved me for a show that played for the masses and forgot me in every movie I made afterward. No one cared about me and my choices. Oh, but now there’s a scandal afoot and suddenly there are New York Times alerts about me as if I’m Helen fucking Mirren? I can’t decide which disgusts Felicity and Bill more—that they allegedly cheated a bunch of allegedly hardworking kids out of their academic slot…or that they’ll forever be mentioned in the same breath as me.

What I am is a woman who used her household income to help her kid. If that’s privilege, let’s lock up every mother who builds a diorama for her kid. People laugh that so much money and effort was expended on USC. They’re not from here, they don’t understand what USC means. But surely they know where it is. I wanted my daughter close to her family. Too old-fashioned for your tastes? Too damning of mine? Worth sending me to jail over? It doesn’t matter. I don’t get to decide anymore. America gets to draw the cartoon. Meanwhile, who can I talk to who is not already on my side, who I do not pay to listen, to tend to my mind and body? I am trapped. And so I let the sun beat down on my face as I watch one living thing destroy another, and I think how very pitiable the three of us are.

Sloane Crosley is the author of three essay collections, including I Was Told There’d Be Cake and Look Alive Out There, both finalists for the Thurber Prize for American Humor, as well as the novel The Clasp. 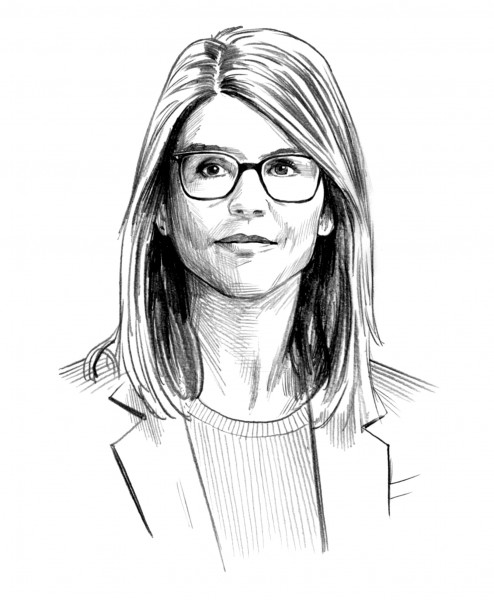 Unlike many other parents indicted in the college admissions scandal, Lori Loughlin has maintained her innocence. Felicity Huffman, by comparison, admitted to paying $15,000 to cheat on her daughter's SAT exam and ultimately served 11 days at a minimum-security prison camp outside of San Francisco.