“We have a wonderful surprise for you,” his host had said as she drove him from the bookstore to the library event. Stroud did not like surprises (being struck by lightning was a surprise), and being told a surprise awaited you was always something bad in Stroud’s experience, as it was when his host proclaimed, “We know how lonely and impersonal hotels can be (exactly!) so instead we’ve booked you into a lovely bed-and-breakfast run by the Blys, a former military officer and his wife.”

When Stroud told his host that he actually preferred a hotel, he was informed that, the reservation having been made, “The Colonel” had a strict no-refund policy. Bly met Stroud at the door, inspected his guest’s (prisoner’s?) wrinkled shirt and sports coat, jeans, and tennis shoes. He appeared ready to perform a general delousing but settled on handing Stroud a lint roller for his jacket and wire brush for his shoes. Stroud was then allowed inside where he was handed a ten-page manual on “proper precautions,” explaining what would not be allowed (food, drink, visitors, music, etc.), rules on shower-curtain maintenance, placement of toiletries, etc., before being led up the stairs to his “quarters” where Stroud was urged to familiarize himself with the rest of the manual.

Which of course he did not do. If Stroud had, after his early-evening event he’d have walked around the neighborhood an hour before entering the B&B, or simply crawled under the hedge by the door and slept there. Instead, Stroud had to knock. (No key, of course.) Once inside, Mrs. Bly nodded at the parlor and said the other guests were already accounted for. Stroud gave a vague wave before turning to go upstairs. Or trying to, because Mrs. Bly directed him into the room where two couples sat on the parlor’s single couch. Stroud was chaperoned (dragged?!) to an armless, straight-backed chair while Colonel Bly and his wife settled in plush leather recliners near the back wall.

“The couple closest to you is Mr. and Mrs. Pruitt and the other Mr. and Mrs. Sedgewick. They’ve all been with us for a week,” Mrs. Bly announced through her gingham mask, “and this is Mr. Stroud, who will only be our guest for one night.”

Being told a surprise awaited you was always something bad.

The Pruitts possessed the rigid-backed, glazy-eyed features of veteran POWs, while the Sedgewicks appeared delighted to be present, already peppering Stroud with their wishes to hear “all about him.” It’s none of your fucking business, Stroud wanted to reply, but choosing levity answered: “Name, Stroud; Rank, Minor Regional Writer; SN, Grape-Nuts Flakes, once daily,” which elicited a scalding glare from the Colonel, blank stares from the Pruitts, and an opening for the Sedgewicks to tell about a Stroud family in their town who owned a paint store, which led to the Sedgewicks’ decision to repaint their kitchen and all the colors considered and number of coats, and they yammered on so long Stroud could have painted their damn kitchen quicker than their boring story about it. When the clock chimed at 19:30 hours, Mrs. Bly said it was time to play board games. Stroud announced an onset of diarrhea and went up to his room where a card on his pillow (no chocolate?) tersely noted that Stroud’s toothpaste container had not been properly sealed.

The next morning a recorded trumpet blasted out reveille at 6:30 a.m. Stroud, whose ride would not come until 10 a.m., put the pillow over his head and tried to go back to sleep. The recording played again at 7:00, followed by a timid knock on his door.

It was the Pruitts, who explained that if Stroud didn’t come down and eat, it would cause “unpleasantness.” So he got up, dressed quickly, went to his assigned seat, and poured himself some lukewarm coffee from the carafe. The Blys were in the kitchen cooking. When Stroud asked where the menu was, Mrs. Sedgewick, askance at his faux pas, explained that the host decided what you wanted for breakfast. Stroud in return asked if the Blys were mind readers, which shut down the table talk except for Mrs. Pruitt whispering that whatever was set before Stroud, he should offer oohs and aahs and further compliments as each item was tasted.

So it began, first half of a grapefruit in what appeared to Stroud as merely an oversized cereal bowl. (“What a wonderful presentation,” Mr. Sedgewick noted cheerily.) Stroud never ate grapefruit and, inexpert with the tiny spoon (and, as always, hopelessly clumsy), his overbrisk jab squirted juice into his eye, causing a fiery pain (medic!) that elicited a yelp. As she might a three-year-old’s, Mrs. Sedgewick took his bowl and cut the grapefruit and freed the edible from the inedible before placing it back before him. Stroud was still dabbing a napkin to stanch the flow of tears when the Blys brought in the second course, a poached egg set inside a wire basket.

The Pruitts added their own complimentary sounds.

Stroud remained mute, even as six pairs of expectant eyes honed in on him.

“Nice presentation,” Stroud said diplomatically, “but I think I’ll pass and wait for the actual breakfast.”

In an impressive act of ventriloquism, Mr. Pruitt, face expressionless, lips motionless, whispered, “That is breakfast.”

At which time, Stroud rose, went up the steps, packed (leaving a long smear of toothpaste on the sink), and left, vowing never to enter a B&B again.

Ron Rash is the author of the 2009 PEN/Faulkner finalist and New York Times best seller Serena, along with numerous other novels, poetry, and short-story collections, including most recently, In the Valley. Twice the recipient of the O. Henry Prize, he teaches at Western Carolina University. 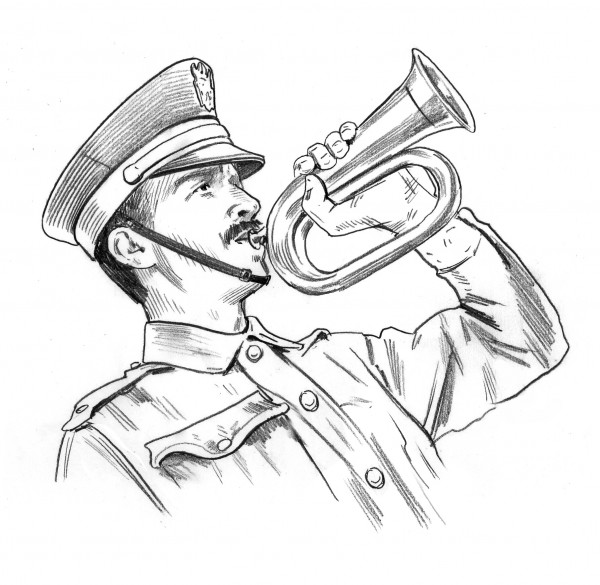 To adjust during the pandemic, bed-and-breakfasts have had to become less communal, more regimented: They’re spacing out dining tables, sanitizing shared board games, and removing hard-to-clean tchotchkes from guest rooms, all of which can hurt the homey atmosphere. One thing still in place: early wake-up calls for breakfast.