She didn’t struggle, the swan. She kept her wings down, sullen, trailing close to the water. Her head flicked up when she saw me, then, with the inertia of a starving girl, she made for the water, listlessly. She was too tired to make even a single sound, the hiss of anger that accompanies the violent flapping of wings. I threw my jacket over her and caught her in my arms. I thought of the story about the brothers who had been turned to swans: The sister wove shirts out of nettles, she caught them and cured them of their swanness. Did they fight her when she tried to pull the shirts over them, nip her stung fingers with their beaks? I had held birds of course, had held swans, but the strange heft of them is something my body can never seem to remember. She was trembling slightly, shivering. From fear, I think. I don’t know what it’s like to be a swan. Black legs, black face, white body, gliding, the water bird with the powerful wings. Speed and power, in water and in the air, a wild power swans have. I don’t know what it’s like to wield the body like an arrow and set forth flying.

Not her: In her body there was no power. She was light when I picked her up, light, I mean, for her size, the bulk of her, her long neck tucked down in disgrace. But not light at all, as I began to carry her without a plan, the long mile to my bike. I began to speak to her, softly speak, to offer her my evidence. The evidence I was not evil, that I meant her no harm. You’re sick, I said, you’ll die here. I’ll bring you to a place that will make you well. I know birds, I said. I know them and I’ve helped them before, hawks, I know, who will kill me if they could, just like you. She was mute: she didn’t speak: her eyes were black. Looking into her eyes was like looking through space into alien intelligence. She was resigned to die by my hand. The tightness in a swan, the swan’s full alertness, gone slack, like one of those little toys that becomes a pile of plastic when you press the button. I could kill you, we seemed to be saying to each other, but I won’t. I won’t.

I don’t know what it’s like to wield the body like an arrow and set forth flying.

Heavy we went down the hill. It was very cold that day. The seasons had been passing without any heed to the human administration, to human chaos, indifferent to the suffering of humans and swans alike. Sometimes I had marveled at the face of the moon, who followed her own, unbreakable laws, casting the fullness of her glow again and again over the living and the dead. When my arms began to hurt, I was glad for it, it made her more real to me, the weight of her life. Some people think all the swans should be killed. They are not native, swans, they were brought over and made a life in these ponds, displacing the native ducks. I didn’t disagree about the life of a duck. I just did not have the ability to weigh a life against another. I could feel her heart, the size of a plum, beating hot against my hand. What would I do when I got to my bike, bungee cord her into the basket? The impulse to rescue—sometimes you make it worse. Sometimes they die anyway.

The cold air bled into the arms of my sweater, but the effort of the swan kept me warm. Her breath came out of her body very softly, but I could hear it, falling in time with my steps. Did she have a mate? Children? I did not know what I would do with her. I did not know if she would survive. My mother told me swans were like pure soul, discerning: If you offered them milk mixed with water they could drink only the milk. I know that is not true but it is a way of believing, which is to say, living. My mother prayed with her eyes open: staring at the image of the god. The swan prayed by breathing, by insisting on more and more breath. I don’t know how I pray. I know this: Out of the refuge, I carried the swan. I carried her.

Shruti Swamy’s story collection, A House Is a Body, was published in August. The winner of two O. Henry Awards, her work has appeared in The Paris Review, the Kenyon Review online, Prairie Schooner, and elsewhere. Her novel, The Archer, is forthcoming. 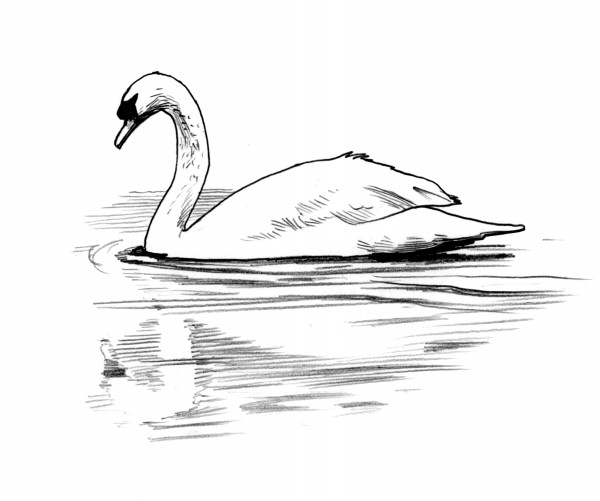 In November, Ariel Cordova-Rojas discovered an apparently sick mute swan at the Jamaica Bay Wildlife Refuge in Queens, New York, and decided to help. After transporting it a mile by foot, then hitching a ride, she and the swan rode the subway into Manhattan to a wildlife rehabilitation center. “If there’s an animal in need,” she said, “I’m going to do whatever I can.”