I go for walks to relax, but each time I see another person I tense up. Are you my enemy?

Several of my neighbors wave hello, some like to stop for a chat.

How are you doing? they say.

Great, thanks! I say without thinking. I try hard to make my eyes show that I’m smiling behind my mask. (I am not your enemy.)

I mean, I’m okay, I correct myself. And you?

There is a lot about the neighborhood I hadn’t noticed before.

For example, some of the street signs have white letters on green backgrounds while others have black letters on white backgrounds. Is there an underlying logic to this system? Who chooses which signs go where? What does it mean, if anything?

Around the block from my place, there is an empty lot with many surrounding trees, all home to loud and active birds. Knocks and chirps of various tones and speeds, plus an eerie, steady screeching, a sound like a home or fire alarm going off. It takes me many passes to notice that the screech starts when I approach the area and stops once I am far away. The bird is warning other birds of my presence; I am an unknown source of danger, a potential enemy.

Though we cannot be close, I am more familiar with my neighbors than ever before.

A woman in a purple house tells me she’s enjoying retirement. Wait here. She disappears into the house, then returns with a small painting of a squirrel; I call it My Return to Nature.

A man walking a poodle gives updates about his adult son. The son is moving from New York to Los Angeles. For work, says Poodle Dad. The son was laid off from his job as a beverage consultant, but he’s such a go-getter that he found an accounts management job not two weeks later. Poodle Dad is more concerned for his granddog, a sensitive little thing that will have a hard time adjusting to her new environment.

It takes me a few steps to realize I haven’t offered the same in return. I speed walk the rest of the way, ashamed. Sweat drips down the back of my neck.

Sometimes I walk as if I have somewhere to go. I wear sunglasses and a big sun hat and my mask to convey how committed I am to avoiding interaction.

I walk to the downtown area, legs moving faster than brain. And though I never stop, avoid looking at it entirely, my mind lingers on the office’s entrance—the sensation of pulling open the heavy door, the bow in the old floors beneath my feet, the punch of scents from the designer candles.

It didn’t even matter that I smiled and smiled and did everything nice for my bosses. (They were probably my enemies?)

I’m trying to explain what I miss about it. Not so much the tasks or the place but the feeling, of what exactly—of security and consistency, a mind less burdened with worry.

The son is waiting for unemployment payments to come through—please don’t mention it to my husband, he doesn’t know, it’s a sensitive topic. The son says now is the perfect time for an adventure, but Poodle Mom is not convinced. How much time does he have? When will the money come? How long will it last?

She tells me I am smart to stay put, where it’s affordable, to ride it out. Have you had any news? Any changes? Any luck?

I shake my head, no, no, no as I hold my hands in fists, not at Poodle Mom, but at something I cannot reach.

Down another street, in a front garden, somebody has planted yellow flowers in the shape of a question mark.

I search for a new job. During a video interview, the people on my screen look in various directions, but none of them seems to be looking at me. One person stares off to the right. Another person’s pupils hop around like a pair of fleas. Another person’s face freezes in a grimace, cracks, then reconstitutes itself in pixelated movements, disappears, then is replaced with a still photo.

I think, That’s me. A still of the original.

I smile and smile and try to be nice for these new potential bosses.

Ah, shit, one of them says. The connection is terrible.

Am I my own enemy? Could I have done something better or smarter? Could I have worked harder or been more prepared? Would that have made a difference? And what now, what next?

I have the sense that I am falling behind, but from who and what, I can’t be sure. I spend an hour on the couch, trying very hard not to think, as I watch the light from the window move slowly across the ceiling, then fade away into the night.

There is a knock at the door. I jump up. An enemy.

Alexandra Chang’s debut novel, Days of Distraction, was published in March and recommended by publications from Vanity Fair to Wired to O, the Oprah Magazine. She’s from Northern California and currently lives in Ithaca, New York, with her husband and their dog and cat. 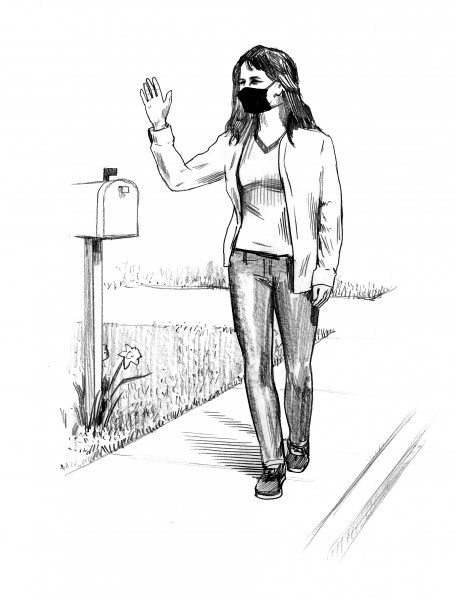 Over the week of August 8, for the first time since mid-March, there were less than 1 million new claims for unemployment insurance. It was a grim milestone: Before the pandemic, that weekly tally had never surged past 700,000. It was also short-lasting: A week later, claims shot back up to 1.1 million.