“What if this is it?” Jibril asked before kissing Brielle on the roof. It was their first kiss, not only between them, but in all the world. They were just 17, still children, but also heartbreakingly adult. They had already witnessed so much death. But these times felt different. Everyone had for so long been distracted by man-made madness, they had forgotten about the ocean, what it could do. Now, the floods had begun.

For years, Jibril had rehearsed that kiss in his mind, a kiss fit for the apocalypse. When it finally didn’t matter anymore what she had, what he might have. How they might murder one another by exchanging a single virion. But the kiss came out sloppily. He was too conscious of his tongue. Like all humans, he slid his shame beneath speech. “What if it’s the end?”

“So?” Brielle feigned coolness in the aftershock of “the kiss.” “It’s about time,” she added. The pandemic had given birth to their generation. It was so mean, that flu, disappearing and reappearing as it did, every wave bearing a new face, worse symptoms. But that wasn’t all that had happened. There was the revolution, the coup . . .

Bri drew away from Jibril, though she wanted him to kiss her again. There was wind between them now where there hadn’t been. Her heart rampaged in the shell of her traitorous body. She knew how swiftly her body could betray her, how it would eventually feed her to death’s greedy grasp. A kiss could do it. A kiss could conjure the plague. But she had dreamed of her lips against the lips of another, of contact, for so long. In olden times, she would have been labeled a hopeless romantic. Indeed, in the backdrop of her kissing reveries, there was always pasture, ocean, a deluge of fireflies. In reality, below them lay what remained of the city. It was burning.

“If this is the end, then fireworks or shooting stars?” Jibril whispered. His breath tickled her ears, down, down, electrifying the insides of her thighs.

“What do you want to see last?” His voice went on torturing her. “Fireworks or shooting stars?”

Fireworks were her first memory. That defiant drumbeat of light erupting across the city, her mother screaming out the window, For God’s sake, you fucking animals. That was only the beginning, what they called the revolution. Then came the worse backlash—the coup, during which the wealthy fled, leaving their emissaries behind to “make the world safe again.” They tried to murder us, all of us, but we lived on anyways like cockroaches, her mother always said. Well Bri, life’s a fucking bitch and then you die. It had been two years since Bri found her mother breathless and blue. “I’ve never seen a shooting star,” Bri said.

It was better to be young than to be old. It was better not to have memories of the world as it once had been.

“Still, you have to pick one,” Jibril said. He drew waves through her hair. Where had he learned all of this? All of these ways to touch her. “Fireworks or shooting stars?”

“Or else . . .” Jibril grasped Bri’s hand in his—and this was new too. Jibril cringed. His hands were warm, full of sweat, even though it was late November. Suddenly, he remembered a line of his father’s—before his father went jogging naked into the last A train that would ever run—that once upon a time snow had fallen, and beneath it, the city looked swaddled in the skin of the stars.

“You have to answer the question or . . . or else, I get to shoot you.” Jibril had never seen snow, but he had seen it in all the old movies. Had seen the way Manhattan once was covered entirely in diamonds. Now, the only illumination came from the other cockroaches burning their trash. There were no more garbagemen who came past midnight, the rumble of their trucks comforting as Santa Claus, blanketed in the cacophonous city soundtrack. It was better to be young than to be old, Jibril decided. It was better not to have memories of the world as it once had been. For instance, Jibril’s mother came from Syria by way of Paris. And she still blathered on about that city of light, those croissants, checkerboard tables, their fussy ballet of a language. He would never have to miss it. Commercial planes stopped flying the year he was born.

To Jibril’s surprise, Bri’s hand was still cradled in his. He gazed out over Brooklyn, his broken land. Blood, flame, floods, rat remains. Even the pigeons were gone. It all had been ending for so long. Jibril was so consumed by feelings of failure—that even in these last of days he would not consummate romance—he completely missed the ecstatic view on the horizon, where there suddenly was smeared three streaks of cerulean light.

Brielle, on the other hand, in fact, did notice the miracle in the corner of her eye but berated the old little romantic fool in her for playing tricks on her mind. “There’s no shooting stars in Brooklyn,” she decided aloud.

Though both Bri and Jibril were in the thrall of that wild somersault of first love, they feared its novelty, so rather than look at one another or up at the sky, they each gazed down at the revoltingly dirty, burning, and likewise flooded city, missing the rest of the enigmatic light show.

Meanwhile, the three spaceships hazarding across the New York midnight had traveled for hundreds of years from the constellation Vela, once known for its glowing sea-green infinity-shaped nebula. Had Brielle ever seen a shooting star, she might have mistaken contact, which was happening at last, not with a lovesick hallucination but with that mundane phenomenon of burning space trash. But these were no meteors, they were Velans—though not in their own language, which was purely mathematical and unreproducible here. Rather, they referred to themselves as the people of time.

Having intercepted the Voyager on their way elsewhere, the Velans played its Golden Record and designated humans as simply: the people of music. It was Blind Willie Johnson’s forlorn, rapturous voice in “Dark Was the Night, Cold Was the Ground” that convinced the Velans to detour their expedition from visiting another planet where the secret of immortality had long been revealed and intraspecies hatred, inequity, and environmental destruction had long been eradicated to our Earth. They were so moved by our music that they expected to hear the planet, upon entering the atmosphere, vibrating with song. But as it happened—truer to Bri’s mama’s philosophy—what they saw on Earth was: Life here is a fucking bitch and then you die.

We had long since forsaken contact, consumed as we had become by our own ends. And so, nobody received the Velans except one blind, old man, who ran raving through the Arizona desert: Deliver me! I’m all yours! Unfortunately, the people of time understood time differently. They knew profoundly the way time could manipulate the heart, that the more seconds they spent on Earth, even to save just one of us, the more they might come to embrace the horror below and the human notion that time heals all trespasses, all wounds, even war, even death. And after all, there was so much else to love in the universe. So the Velans quickly moved on.

The shooting stars of their spaceships disappeared from the New York horizon before Jibril finally summoned the courage to kiss Bri again. And it was almost perfect, the kiss, this time.

“Adam and Eve,” Jibril said, having turned contemplative. “What do you think they were thinking about that first day of existence?”

“How they never wanted to die,” Brielle replied.

Hannah Lillith Assadi’s first novel, Sonora, received the Rosenthal Family Foundation Award in Literature from the American Academy of Arts and Letters and was a finalist for the PEN/Robert W. Bingham Prize for Debut Fiction. In 2018, she was named a National Book Foundation 5 under 35 honoree. Her second novel, The Stars Are Not Yet Bells, will be published in 2021. 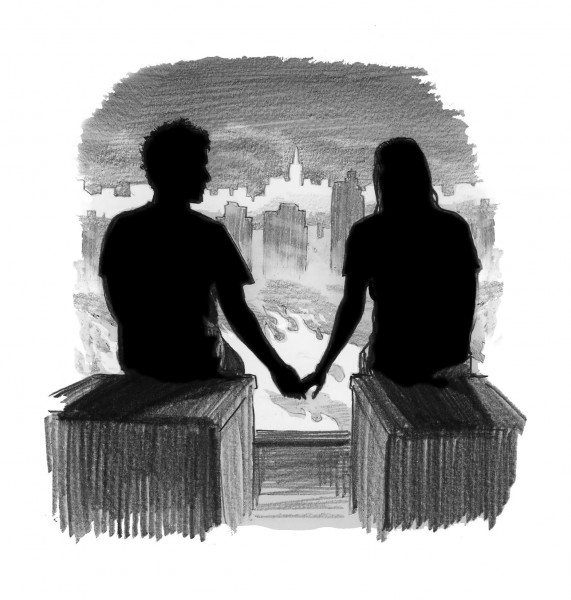 Since 2007, a shadowy agency within the Department of Defense has been secretly cataloging classified observations of UFOs by military personnel, trying to determine if they’re the work of foreign nations or can otherwise be explained by earthly phenomena.