Here in Otisville, everyone betters himself. GREs. LSATs. My cellie is studying for his real estate license.

And me, I’ve lost thirty pounds. And started writing.

I was popular the minute I arrived. Most guys wanted to know if Mr. Trump was as terrible as he seemed (Yes!), especially the black and Spanish guys. They hate him. They’d ask, Is it true he wears adult diapers? (No comment.) Did he do that thing with the Russian hookers? (No comment, but duh.) Some guys wanted legal advice. (I had to confess my areas of expertise were more taxicab medallions and foreign policy.)

My wife was worried that prison would be like Law & Order, but I told her everyone here is nice.

The Fat Man has his fans here, too. Fox-fucks and psychopaths mostly.

Otisville is medium security, like a middle school with razor wire. There are tennis courts and kosher food, and I was the biggest star here once Mike The Situation from Jersey Shore got released.

That’s when I knew it was going to be okay, that life inside wasn’t so different from life outside, the day I saw The Situation outside the rabbi’s office.

Celebrity is the great equalizer.

Now that I write that—I guess it’s the opposite of an equalizer.

Because it makes you unequal.

Hmm. This is going to be harder than I thought, writing a book.

My lawyer says they’ll hire a ghostwriter, but I kind of want to do it myself. More betterment.

But the words: equalizer. Situation. Stormy. Fixer. Rat. It really makes you think.

I have only one enemy in here. This gray-haired guy doing eight years for fraud. It’s his second stint in Otisville. He’s like the yard bull. He calls me Rat. Fixer. Snitch.

Everyone calls him the Ponz, because he specialized in Ponzi schemes, and because of the Fonz from Happy Days.

Once, we were in the activity room watching the news and Giuliani was tripping on his own dick and the Ponz said he looked like one of those balls you squeeze for stress, where the eyes pop out.

Even you were a better lawyer than that guy, said the Ponz.

Thanks, I said. But it wasn’t a compliment. That even. Words.

Then the Ponz said, You miss it, don’t you, Rat?

I ignored the rat part. Not at all, I said. I’ve lost thirty pounds. My conscience is free.

Come on, he said. You miss it. You fucked up by talking. You could’ve gotten a pardon. Instead, you know what snitches get, right?

That’s when I got scared.

Once we were in the dayroom watching the news and Giuliani was tripping on his own dick and everyone was laughing and saying he looked like one of those balls you squeeze for stress, where the eyes pop out.

There aren’t actual gangs here, no La Raza or Aryan Brotherhood, but it doesn’t mean you don’t have to watch your back.

For instance, the Ponz is in a book club, the WCOG (White Collar Original Gangsters). To get in you have to be doing at least a nickel for tax evasion, fraud, or insider trading. They meet in the quad to talk about CEO autobiographies. Sometimes they mix in a Michael Lewis or Malcolm Gladwell book, but only to trash it.

I didn’t sleep well after the Ponz said that.

Was he right? Did I miss it?

And now? Would I ever be more than a joke to the MSNBC lame-streamers? A traitorous rat to the Fox-fucks?

I felt so alone.

For a while, there was a rumor that Martin Shkreli was getting transferred to Otisville. I imagined roaming the halls with another celeb, showing the Pharma Bro around: There’s the weight room and here’s the basketball courts and there's the pharmacy. We’d laugh. The pharmacy!

Then the Ponz would see us, and I’d say, Hey, Ponz. You stole millions? This dude stole billions. Suck on that.

But they ended up sending Shkreli to a different prison. And I was truly alone, the only celebrity on my block. One day I was in the activity room, and a guy tripped on my laptop cord and unplugged it. I looked up. It was one of them, a WCOG book clubber.

He apologized, but I got the message. I wasn’t safe anywhere.

If this was a TV jail, I’d carve a spoon into a knife or fill a pillowcase with soap.

But here at Otisville there was nothing to do but tell my counselor, and he was a Gestalt therapist who tried to frame the whole thing as a patterned reaction I have to feelings of rejection.

It was my lowest point.

But that’s when the virus arrived. And everything changed.

No more activities. No more book club. And without his boys, the Ponz was just another old fraud.

Then came even better news. They were sending some of us home early. And I was one of the lucky ones.

Honestly, I hadn’t wanted to admit how much I missed my family. Even to my therapist. It hurt too much to think about.

But this virus, it put everything in perspective. Life. Death. What did the Ponz matter now? The virus didn’t see lame-streamers and Fox-fucks. To the virus, we’re all just meat. The virus—that is the great equalizer.

So, on the last day of my two-week quarantine, before I went home, I wrote a note to the Ponz. I paid a trustee to deliver it to him, tucked inside his National Review.

Hey Ponz, I wrote. You wanna know what else snitches get? Book deals, muthafucka! Fixer out—

Jess Walter is the author of six novels, one book of short stories, and one nonfiction book. His novels include the New York Times best seller Beautiful Ruins and Citizen Vince, which won the Edgar Allan Poe Award. His new novel, The Cold Millions, will be published in October 2020. 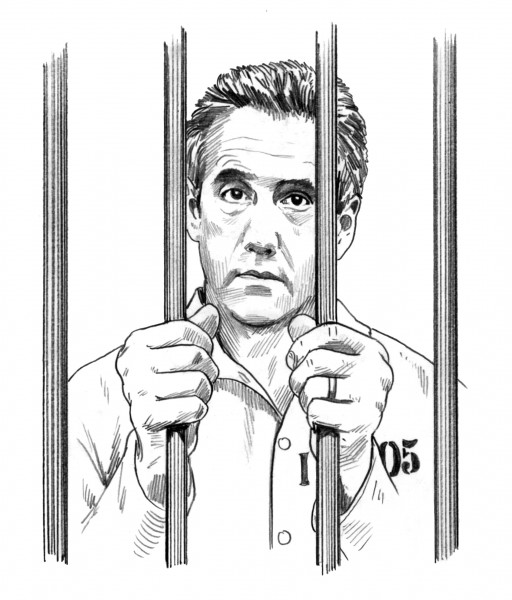 Due to the spread of the novel coronavirus in prisons, Michael Cohen was one of nearly 1,200 inmates released on May 21 to complete their time in home confinement. Once one of Trump’s closest advisors who later turned on him before going to jail, Cohen is reportedly working on a tell-all memoir that will be published before the 2020 election.

Jess Walter on celebrity, betterment, and what Michael Cohen means