“But you’re not sick,” her mother said.

“How do you know? They said you could have it and not even know it.”

“Where did you hear that?”

“From you and Dad. When you were talking in the kitchen.”

Her mother pinched her mouth and concentrated her eyes on her laptop. She had it balanced on her thighs, as she sat in bed with pillows plumped up all around her.

Gwen walked to the closet, where the bathrobe hung from a hook. She rubbed its fabric against her cheek. “Please can I wear it? It’s a sick day.” The schools had shut down, and for now, Gwen was happy to sleep in and stream cartoons on her iPad. “It’s a sick week. Maybe it will even be a sick month.”

“It’s not going to be a sick month,” her mother said in a voice sharp enough to make Gwen go silent. “I’m sorry. But I need to work. Go play Legos or something.”

Her parents didn’t want her to be afraid. So in the car they snapped off the radio when the news filled the space between songs, and at home they changed the channel on the TV when the tape scrolled along the bottom of the screen about press conferences, school closings, the rising death toll.

But Gwen knew better. There was the time her father came home from Costco with six packs of toilet paper, ten flats of bottled water, and a rattling pile of cold medicine. “Why do we need this much toilet paper? Isn’t this enough toilet paper for a hundred years?” Gwen said, and he said, in a too cheery voice, “There was a sale!” There was the time her mother packed her suitcase for a work trip, and then unpacked it a few hours later, saying, “I decided I’d rather stay home and bake cookies with you!” An exclamation mark hid behind their lies. Gwen only believed them when she heard them whispering to each other at night. “It’s going to be okay,” they said. “Fear is the real virus.”

Another way they whispered was by texting. Sometimes Gwen saw their phones glow with messages that read, “Now they’re saying 14 percent??” or “It’s everywhere” or “First he tested positive, then negative, then positive again” or “How can we know what to do when the answers are always changing?”

Gwen stood by the window and looked out on the yard, where last year’s leaves swirled with the breeze. She wished you could see the sickness like that. She wished it wasn’t invisible. She imagined it as a purple-green mist oozing along the sidewalk and up the porch and seeping through the cracks around the doors and windows.

Her father was drinking more whiskey—he called it preventative medicine—and her mother stopped going to work and started wearing her bathrobe all day every day. In the morning Gwen would cuddle up against her and pet the fabric and say that it felt like something else—like warm snow, like kitten bellies, like cotton balls, like fluffy clouds. But today her mother said, “To me it feels like armor.” Because it made everything impossibly cozy and safe.

She wished the sickness wasn’t invisible. She imagined it as a purple-green mist oozing along the sidewalk and up the porch and seeping through the cracks around the doors and windows.

But one morning her mother wasn’t there when Gwen checked the kitchen and the living room. The door to her parents’ room was closed, and when she tried the knob, it rattled but wouldn’t give. She knocked and her father came to the door and opened it only a crack. “What’s up?” he said, rubbing his eye with the heel of his hand.

“Aren’t you guys coming out?”

“I will,” he said and looked back toward the bed. Gwen could barely see the shape of her, a white mound, wrapped up in her bathrobe beneath the comforter. “But Mom’s going to keep resting.”

It was just a drippy nose at first. Then a scratchy cough. Then her face flushed with fever. And her breathing grew thick and damp and reminded Gwen of what it sounded like when she blew bubbles into her milk with a twisty straw. She never left her bedroom anymore. The door stayed closed with a line of light seeping beneath it. Gwen would try to talk to her from the hallway, and her mother would yell out, in a froggy voice that didn’t sound like her own, “Good night” or “Love you,” but often the words would give way to a coughing fit.

Her father watched TV with the sound off. He scrubbed with soap and sanitizer so much his knuckles split and bled and dotted his sleeves. He fell asleep on the couch with a bottle beside him. He swatted Gwen’s hand if he caught her rubbing her eyes or picking her nose. He wore a mask, and he wanted Gwen to wear a mask too, but the mask was itchy and hot and felt like breathing in air from the dryer vent, so she snuck it off when she could. He asked if she had washed her hands more than he said he loved her.

Gwen woke up at night to voices in the hallway. The thud and scrape of footsteps. She hurried from her bed, thinking her mother was better. But when she cracked the door, she discovered three figures who looked like astronauts. She couldn’t tell if they were men or women, because their bodies were sexless in their yellow suits and the clear plastic hoods smeared the details of their faces. The air was cold and breezy as if all the windows were open. Lights flashed outside. And for a dream-hazed moment Gwen wondered if the house had detached from their oak-lined neighborhood and floated off into space.

She watched the astronauts disappear around the corner before she crept into the hallway. In one direction was the living room, where she could hear the blurry mutter of her father’s voice. In the other direction—her parents' bedroom. The door was open, and the bedside lamp was on, brightening the space with an anemic yellow light.

The room smelled off. Sour. The pillows and comforter lay heaped on the floor. But the bathrobe remained. Gwen picked it up. The fabric no longer felt soft, but heavy and stiff and damp, and it no longer appeared white but a ghostly gray. When she pulled the robe on, fitting her arms into the floppy sleeves, knotting the belt until it choked her waist, she felt the lingering heat her mother had left behind.

Benjamin Percy is the author most recently of The Dark Net and the story collection Suicide Woods. He writes Wolverine and X-Force for Marvel Comics. His honors include a fellowship from the National Endowment for the Arts, the Whiting Award, the Plimpton Prize, two Pushcart Prizes, and inclusion in Best American Short Stories and Best American Comics. 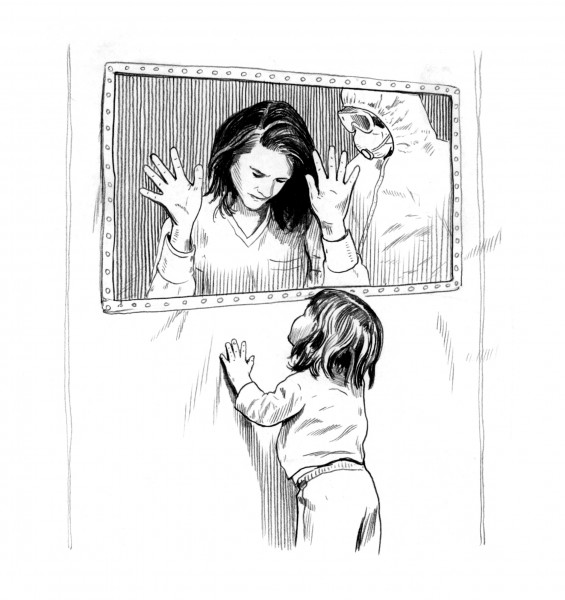 As cases of coronavirus pass 100,000 globally, thousands of Americans have been self-quarantined in the United States, such as 8,700 in the San Francisco Bay Area and another 2,700 in the New York City area, as of early March.