The most uplifting news of the past six months? Two giant pandas in Hong Kong finally...

The incident, the day that bifurcated my existence into before and after, happened back in 2016. By then, I’d been at Breeze Point Zoo for nine years, though time is elastic in a life such as mine.

That first time I saw him, I didn’t know his name or even his species; I pieced this information together afterward by eavesdropping on my handlers, who have long assumed that I don’t understand Cantonese. All I knew that day when I awakened from a morning nap atop a massive rock was that, perched on a log hardly more than a meter away, regarding me unabashedly, was a small creature with reddish fur, pointy ears, inquisitive brown eyes, white whiskers, and a long striped tail. How enchanting he was! How lithe his build, how glossy his coat, and in his gaze, what depths, what perspicacity! The internal jolt I experienced made me abruptly understand that I was sleeping my life away both literally and figuratively.

I’d been napping on my stomach, with my glossy black forelegs flung in front of me, and I rolled onto my side to display my heft, all 120 kilograms of it, to its most flattering effect. I routinely eat twenty kilograms of bamboo a day. Up until this very moment, that consumption had been my raison d’être.

He approached. Tentatively at first, then with greater confidence, he passed my head and walked regally around me to sniff my hindquarters, to nudge my back. The contact was electrifying! Returning to my head, he looked into my eyes from close range then cocked his ears to the right, indicating I should follow.

What ensued was truly magical, the most intoxicating interlude of my life, and I still am unable to say whether it lasted minutes or hours. My enclosure featured an ersatz bamboo forest and cave, multiple ponds, and wooden climbing structures, and my new friend and I frolicked through it all. I did not know then that my friend was a red panda, that his name was Zixuan, or that he’d escaped his enclosure for mine. All I knew was that it was delightful to lumber and climb with him in the sun. I was impervious to the humans pointing and hooting from above, their strange rubbery faces contorting with pleasure. And yet it was the delight they took in the sight of Zixuan and me, the commotion of their delight, that eventually drew the attention of the zoo handlers, who, when they realized what had happened, entered my enclosure—there were six of them, in blue medical gowns and rubber boots—and restrained me while removing Zixuan. I still remember the sight of him as one of the handlers carried him away, the yearning in his mournful expression and proud tail. I have not seen him since, and it has been agony.

Do you know what it’s like to yearn for four years for a red panda who is mere meters from you, beneath the same sky, breathing the same air from the South China Sea? Do you know?

I soon learned that he’d been living—and as far as I know, still does—in an enclosure adjacent to mine. Also that his species in general and he in particular are known for being escape artists. It is this fact that has kept me, these last four years, in a constant state of alertness and hope. That he’s plotting another escape. That one day, if even for just another moment of bliss, we’ll be together again.

It’s not that I dislike Da Pang, my enclosure mate; indeed I feel a sincere, if moderate, affection for him, but really, who could be attracted to someone when you see them defecating up to fifty times a day? I’ve heard our handlers attribute our aversion to mating to the low libido endemic among giant pandas, but this explanation underestimates our individual idiosyncrasies.

All of which is to say that the handlers are erroneous in their assumptions about why, once the zoo was closed to visitors earlier this spring, Da Pang and I engaged in our first ever, how might I say this, “voluntary coupling.” Tian Tian and Da Pang have made a breakthrough, the handlers told one another and journalists worldwide. All they needed was a little privacy. They rewarded us with apples and carrots.

But it wasn’t privacy that motivated me. It was boredom. I mean, seriously. Covid didn’t just shut down your world. For the last four years, I’ve spent my waking hours being mildly amused by the human visitors to our zoo and my sleeping hours dreaming of a reunion with Zixuan. Then the human visitors vanished, and, many weeks into the new quiet, in a moment of profound ennui, I decided I might as well give a union with Da Pang a whirl. But even in the act itself, with Da Pang fumbling behind me, pressing his body against mine, the small bump of his pandahood trying to find the appropriate cavity, it was Zixuan I thought of. As for Da Pang, I’m not convinced he felt any more enthusiasm than I did. I know that over the years, our handlers have tried to encourage him with leg-strengthening exercises, with exposure to the excretions from my scent glands, and even with spicy videos of others of our kind. But I suspect in the end it was less that such incentives proved effective than that he was trying to please our handlers. Passion, alas, cannot simply be summoned.

Meanwhile, the fact that so much about Zixuan was, and is, forbidden and impossible—our respective sizes, our enclosures, our differing species—has never decreased my longing. Do you know what it’s like to yearn for four years for a red panda who is mere meters from you, beneath the same sky, breathing the same air from the South China Sea? Do you know?

You tiny wily heartbreaker, I think as I chew bamboo. Are you coming back to me and if so, when? Hurry please, Zixuan, because I miss you terribly.

Curtis Sittenfeld is the best-selling author of six novels, most recently Rodham. Her story collection You Think It, I’ll Say It was picked for Reese Witherspoon's Book Club. Her books have appeared on numerous Best Books of the Year lists and have been optioned for television and film. Her stories have appeared in The New Yorker, Esquire, and the Best American Short Stories, of which she is the 2020 guest editor. 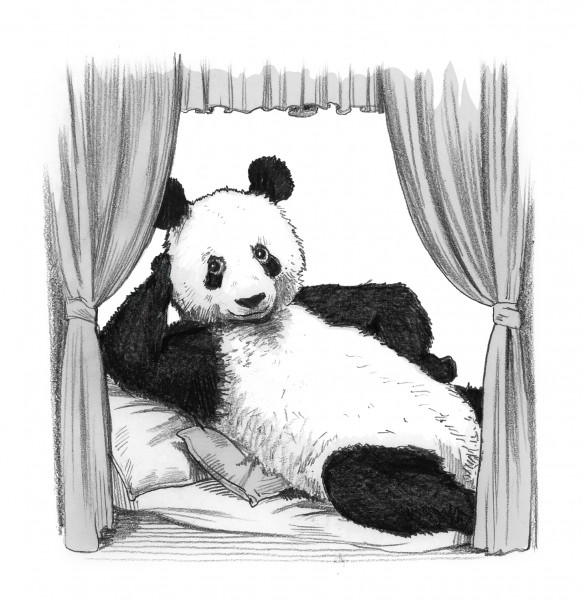 After 13 years of living with one another in a Hong Kong zoo, two pandas fornicated for the first time in April: a rare feat for a species famously, and somewhat dangerously, disinterested in sex.