The Barrier doesn’t think in terms of years, not in any conventional sense; but sufficient weather systems have traveled its length, doing their utmost to compromise its integrity, that the Barrier is conscious—on a structural, elemental level—of having passed its prime.

Evidence abounds. The Barrier’s steel-and-zinc-alloy bollards, once so gracefully crenellated, so subtly iridescent in the blazing midday sun, are pockmarked and rust-streaked and crumpled. Its angled concrete fundament—made, due to budgetary and environmental concerns, from locally quarried traprock—is fractured and eroded, and its six-inch electrified spikes have lost both their grace and their alternating current, to say nothing of their effectiveness at puncturing human flesh. Migrants, military personnel, traders, smugglers, small children, and beasts transgress the Barrier with impunity. At certain key junctures—Nogales, Sonoyta, virtually the entire state of Texas—there is no longer any Barrier to speak of. One year ago, a bespectacled young man, apparently some kind of student, approached the Barrier without the least sign of fear or trepidation, just outside of El Paso, and etched the following verses into its rust-encrusted pediment with a Swiss Army knife:

MY NAME IS OZYMANDIAS, KING OF KINGS. LOOK ON MY WORKS, YE MIGHTY, AND DESPAIR!

That was a low point, no question about it. A fresh humiliation to add to all the others. But in spite of such cruelties—in spite of humanity’s glaringly obvious indifference to its plight—the Barrier refuses to give in to despair. When things are at their worst, when morale is at its lowest, it has only to consider the trench.

The Barrier refuses to give in to despair. When things are at their worst, when morale is at its lowest, it has only to consider the trench.

The trench, by any standard, is a thing of savage beauty. The years have wrought changes upon it as well, perhaps to a greater degree than on any of the Barrier’s other features; but these changes have themselves been things of wonder. Contrary to what the naysayers and the skeptics—not to mention the Army Corps of Engineers—argued when the trench was first proposed, it has not lost its water to evaporation, nor has its channel become clogged with falling rock or displaced earth. Not even the most passionate of the pro-Barrier advocates have thus far managed to explain this. In defiance of all reason, of all sense, the trench endures.

And that is by no means all. Of the 760 breeding pairs of American alligators imported at considerable public expense from Lake Okeechobee in 2020, 758 died of hunger within the first month; the remaining two pairs, however, have gone on to populate an astonishingly extensive expanse of the brackish, oily, oxygen-starved canal system with their scaly progeny. Though contact with the human population has admittedly dwindled over the years—dwindled, in fact, to the point that the Barrier sometimes questions its own raison d’être—the alligators have more than made up for the absence of people. The alligators have given the Barrier an altogether more beautiful, more reasonable, more justifiable purpose. In a word, they give the Barrier a reason to exist.

If only the same thing could be said about the snakes.

John Wray is the author of five novels, most recently Godsend. The recipient of a Guggenheim Fellowship, a Whiting Award, a Cullman Fellowship from the New York Public Library, and a Mary Ellen von der Heyden Fellowship from the American Academy in Berlin, he was named one of Granta’s Best Young American Novelists in 2007. 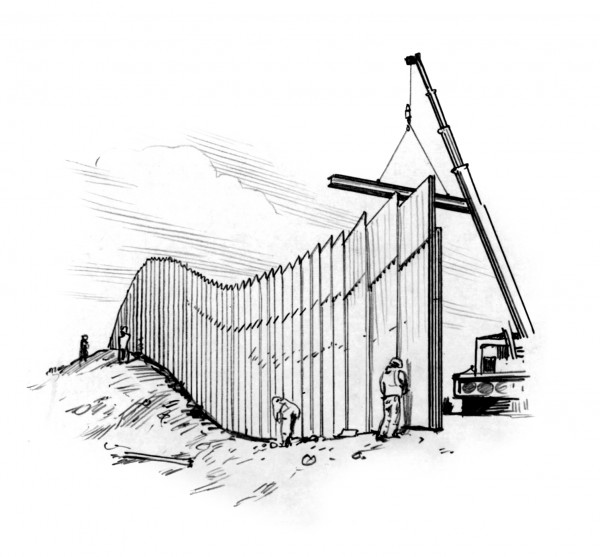 While Trump originally called for reinforced concrete walls that would reach 30 feet or higher, the “border wall system” the government has built so far is comprised of steel bollards between 18- and 30-feet tall, lights, cameras, and sensors.

“​The biggest challenge was finding an approach that was absurd enough to feel appropriate to the absurdity of the basic situation.”​